Recently I picked up some pizza for dinner instead of making it myself.

Where are we going? To understanding the trade deficit with a pizza story.

When I create my own pizza, it takes me hours. First, I need to pick up three kinds of cheese, make some tomato sauce, and roll the dough. I also need arugula for myself and sausage for my husband. Then, after all of the shopping and preparing is done, I place the pies in the oven and look forward to some good food.

Preparing the pizza, though, would have required a big sacrifice. It meant I couldn’t plan a class, write a blog, and walk several miles. So instead I bought it. In trade terms, let’s say that I imported a pizza.

If the price of my “imported” pizza exceeds what I receive for my “exported” teaching services, we could say I have a trade deficit. Unconcerned, I would respond that the imbalance is correctable. Most crucially, I need not curtail the trade that is good for the restaurant and me too.

Similarly, nations need not limit trade when they have a deficit. Instead, they can raise or lower their purchasing power because a stronger currency makes imports relatively cheaper. Or, they could send more dollars to consumers through economic growth. Or, they can just recognize that they have a deficit because of employment-generating foreign investment (think a BMW made in South Carolina).

Also showing why we need not worry, below you can see a correlation between more household wealth and a larger trade deficit: 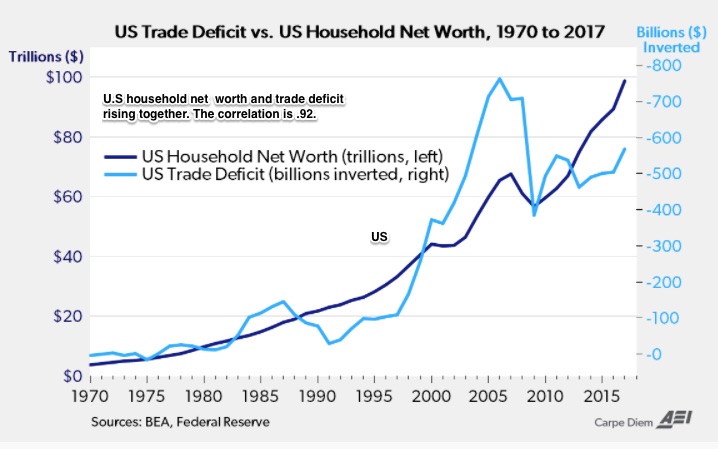 My whole point is that a trade deficit, when manageable, is not bad. And, even if it you do have to diminish it, the worst solution is less trade. Nineteenth century economist David Ricardo explained why.

When you trade, he said, you should specialize in whatever requires a lower cost–a lesser sacrifice for some alternative. Only then will you have a comparative advantage for whatever you are making.

We could say for example that Serena Williams has a comparative advantage playing tennis. So, if she has to choose between practicing serves or preparing her baby daughter’s meals–even if she is the best at both–she should specialize in tennis because she sacrifices less (the meals). Meanwhile, the person preparing the baby’s food should also have sacrificed something with a lower cost (maybe a minimum wage job elsewhere). The result? Through comparative advantage, the Williams household has maximized its productivity.

Looking at world trade, David Ricardo used comparative advantage to prove that nations should make the goods and services that have the lower opportunity cost and require the smaller sacrifice. When they do, the world is more productive.

And that is why I don’t make pizza.

My sources and more: My go-to website for understanding trade is always the Peterson Institute. With the deficit, a good place to start is “We Know What Causes Trade Deficits” and “Three Ways to Reduce a Trade Deficit.” In addition, this response to Trump administration policies was excellent as was this cfr paper.

Why Daylight Saving Time is Good For Us

Why It's Tough for OPEC to Fight the Frackers