When Rush Hour 2 needed many millions in 100 dollar bills, Independent Studio Services (ISS) sent them 14 pallet loads of 4′ x 4′ cubes of fake money. During the filming, the Secret Service showed up, issued a cease and desist order, and accused ISS of counterfeiting. It appears that movie extras had been spending the cash nearby.

Although no one wound up in jail, the raid cost ISS a lot of real money. Their digital files were confiscated and billions destined for a slew of movies, destroyed.

Below, the real $100 bill is the top image while the Rush Hour 2 fake is under it. Commenting on the bogus bill (that does look rather real), a Secret Service agent said,”…son of a gun, if it’s green and it says ’20’ on it, somebody will take it.” 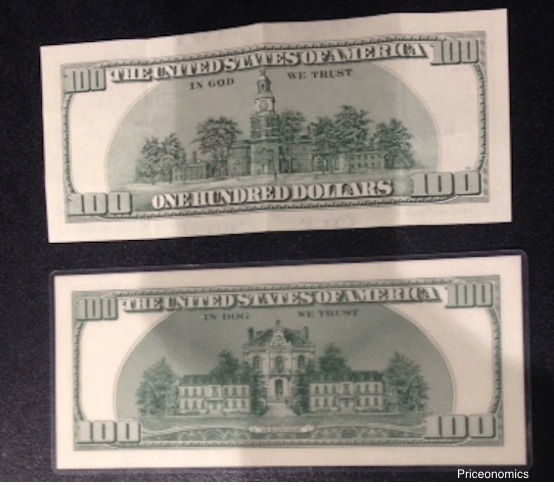 In this Rush Hour 2 scene, the fake money flies after an explosion in a casino:

Occasionally a movie maker decides to use actual cash. When The Brinks Job (1978) needed close-ups of U.S. currency, they borrowed the money from a bank. Real guards hovered near huge piles of real cash that, after filming, was counted and returned ASAP.

So, where are we going today? To what makes money real.

Abraham Lincoln signed the act that created the Secret Service on the day he was assassinated (April 14,1865). Because somewhere between one-half to one-third of U.S. currency was reputedly fake, the Secret Service’s sole purpose was to combat the counterfeiting.

Fast forwarding to 1992, we can look at current counterfeiting criteria. According to the Counterfeit Detection Act of 1992, the fake money has to be clearly bogus in several ways.

Also, after its final use, the equipment used to make the money has to be destroyed.

The textbooks say that any commodity can be money if it has three basic characteristics:

It makes sense that money needs to be real for us to believe it is a medium of exchange. Get enough of those fake movie dollars in circulation and we have a problem.

My sources and more: Thanks again to 99% Invisible for another quirky episode. Only the beginning, the fake money story took me to more detail about movie prop money at priceonomics and Mental Floss. From there, it made sense to look at some counterfeit money history.

Please note that sections of Our Bottom Line were in a previous econlife post.

Everything You Never Knew About the Sandwich