But first some Medicaid facts.

Yes, Medicaid is a program for the poor.

The Affordable Care Act (ACA) set an income threshold for receiving Medicaid whereas previously, the states had more leeway deciding the cutoff. Medicaid also provides (with the Children’s Health Insurance Program) universal coverage to children in poor, near-poor and middle income families and to children with special care needs.

But, as our nation’s largest source of health insurance, Medicaid covers much more.

Pregnant women who earn near and below poverty level incomes are Medicaid eligible. So too are disabled adults. In addition, the elderly can get longterm care coverage.

From the following stats, you can see the 77 million Medicaid beneficiaries in 2017:

That 77 million number of beneficiaries could have moved higher. However, in 2012, the Supreme Court decided that the ACA could not require states to extend Medicaid to all adults earning up to 138% of the poverty line. Although they continued their Medicaid funding partnership with the federal government, roughly 20 states refused to expand coverage.

And that takes us to an interesting story.

When 20 states said no to Medicaid expansion, they became a perfect control group for research on divorce rates. In the pre-ACA world, getting Medicaid eligibility for longterm care meant poverty. The way to become poor was to divorce, split your assets, and let the sick person deplete all he or she had. Then, that individual got Medicaid while the healthier spouse still had some of his or her nest egg.

You see where this is going.

Under the ACA, there was no asset test–only an income threshold. So states that accepted the Medicaid expansion wound up with 5.6% fewer divorces among people 50 to 64.

Rather like a vaccine can minimize disease beyond the people who are inoculated, Medicaid expansion might have created a positive externality for married couples when it only had an income threshold for all adults.

A scholar from the University of Kansas expressed it this way: 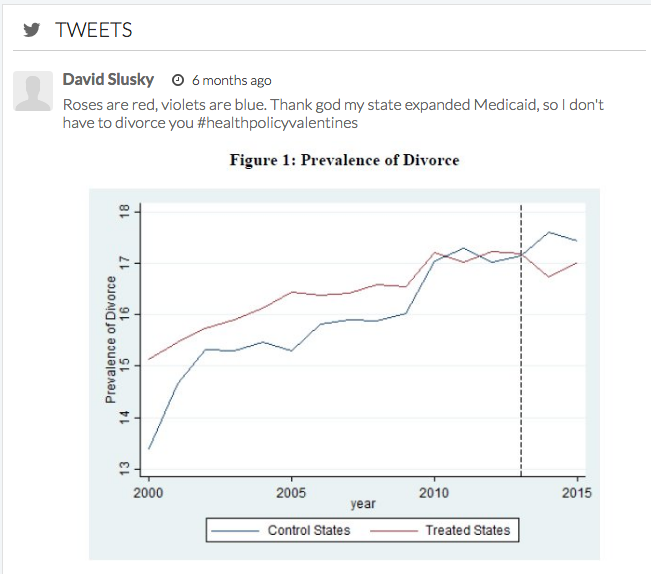 So, when we hear Congress debating the fate of Medicaid, we can only ask them to look for the positive and negative externalities that their decisions create.

My sources and more: Through massive spending, millions of beneficiaries and a huge federal and state infrastructure, Medicaid facts are endless. For the absolute basics, I recommend this one page JAMA summary. For more, Kaiser is a good destination as well as Austin Frakt’s blog (the source of my numbers). From there, it is easy to uncover negative and positive externalities. This paper on Medicaid and divorce was one possibility among many.