The most recent avian influenza outbreak was one of the worst. In the U.S., 32 million egg-laying hens died while one third of Iowa’s egg layers were wiped out. Predictably, egg prices spiked.

Yes, no one expected those high prices to remain. But they were surprised by recent new lows.

Rewinding to 2015, you would have seen devastated egg markets. As the virus spread, fewer “breaker” eggs were sold as liquid to food processors and the quantity of whole eggs in grocery stores was down. Meanwhile, the egg half of Egg McMuffins became a new worry for McDonald’s as restaurant chains and food processors wondered where their eggs would come from. It was an ideal environment for Michaels, a seller of plant-based egg substitutes.

By 2017, the severe side of the avian flu had passed and hens multiplied. More egg layers meant more supply and the hope that demand would increase at a similar pace.

But it did not. Those egg substitutes and fewer egg exports appear to have become the new normal.  They have helped to nudge down the wholesale price of eggs in the Midwest to 98 cents a dozen–a 62% drop during the past two years.

The following graph displays the corresponding plunge for retailers. Having hit a high of $2.97 a dozen for Grade A large eggs during September 2015, the market price now is close to $1.33. 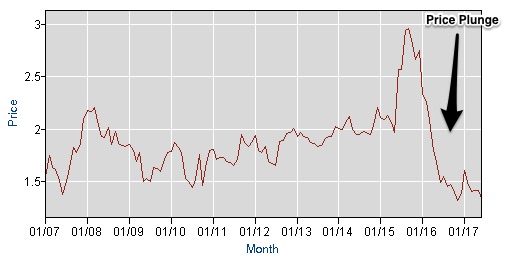 As economists, we would say that chicken supply is elastic in the long run. That just means producers have access to enough land, labor and capital for chickens to increase by a greater proportion than the price change. Responding to high prices and the demise of flocks, they raised more egg layers.

Also though, they expected demand to return to its previous level. When it didn’t–perhaps because of a switch away from eggs as the flu spread–producers’ profits declined. 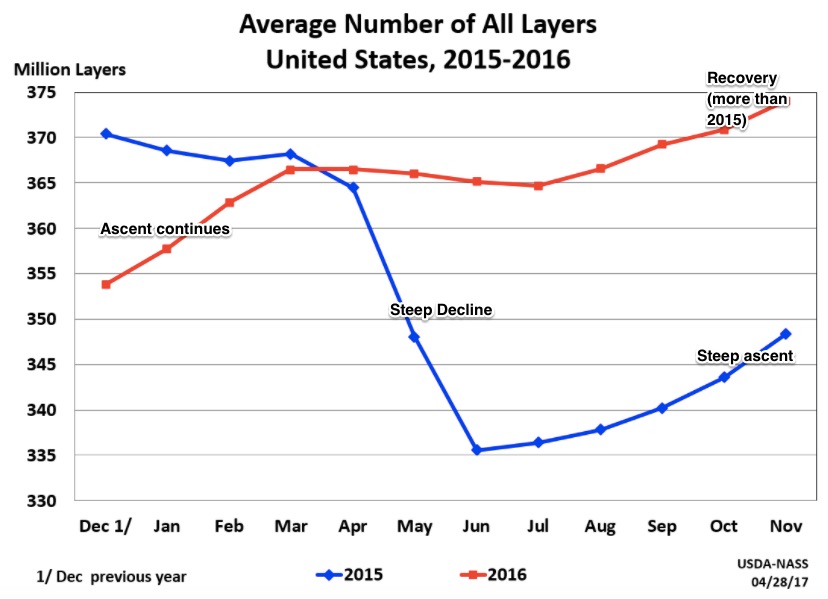 You know what happens when demand rises less than the increase in supply: 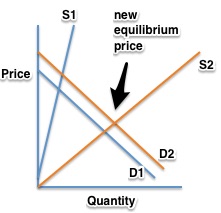 Price plunges and the market scrambles to help struggling producers.

My sources and more: I was alerted to the egg market slump by this WSJ article. A further search then took me to Reuters for some history. And the BLS is always a handy source of graphs.