A century ago, if you didn’t grow all of your own food, you bought it from the vendors at a public market, a small grocer, and maybe a local peddler. At the public market you mingled with a mixture of barrels, boxes, dead animals and chicken coops. Very different, the grocer’s counter separated you from the meat, produce and dry goods.

Soon though, wrapped in cellophane, meat transformed how we buy food.

Our story starts during the 1920s with the beginning of self-service in the first supermarkets. At first, shoppers could help themselves with many items. But still they needed butchers to cut their meat and produce people to weigh their fruits and vegetables.

It took a new type of cellophane to eliminate the need for those butchers and produce people. Developed by DuPont, the cellophane optimized the flow of moisture and oxygen. The result was pre-packaged meat and produce and a new way to shop. By the early 1950s, half of all supermarkets had self-service fresh meat counters.

A 1945 ad in The Saturday Evening Post: targeted women. Its goal was to encourage shoppers to “buy through their eyes.” 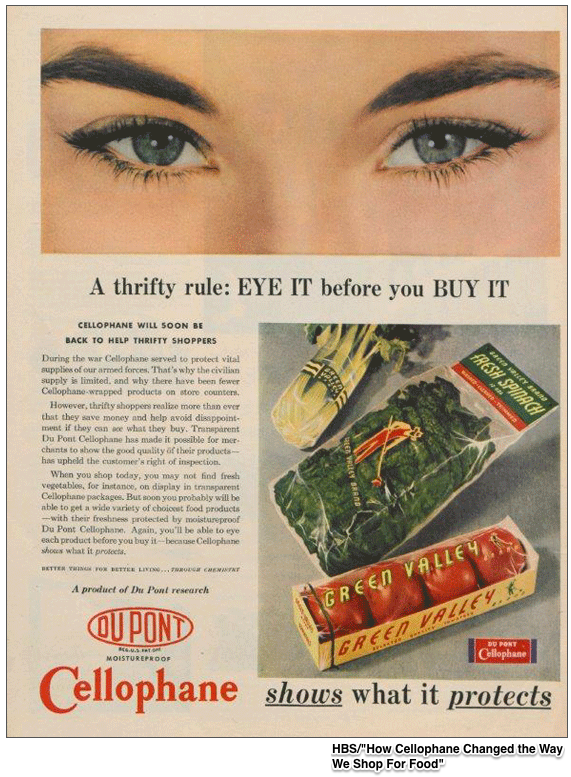 In this 1949 ad from The Saturday Evening Post  shoppers are told that pre-packaged meat saved them time and money: 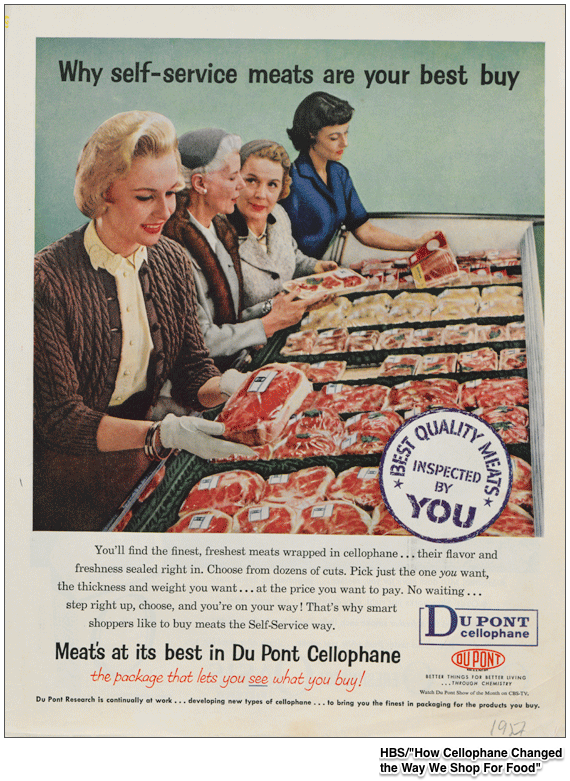 This ad from 1950 in The Saturday Evening Post reflected the growing concern with sanitation during the first decades of the 20th century: 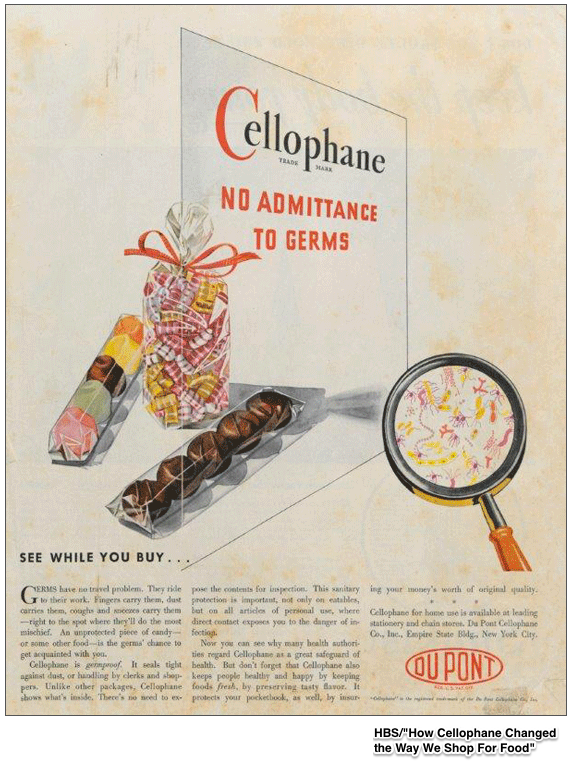 Through creative destruction, economist Joseph Schumpeter (1883-1950) described how new ideas propelled capitalism. For the grocery business, cellophane was one of those new ideas that upset an old way of doing business.

In the meat department, cellophane meant that butchers would rarely do the custom slicing that had prevailed. Instead, slabs of meat had to be pre-cut and packaged. As for color, the meat couldn’t be purple or brown. It had to be the right shade of red. From here, retailers realized they needed special light from soft white fluorescent bulbs and appropriate refrigeration. Someone also soon realized that chemical preservatives (ironically) conveyed that fresh look.

But the big difference? Cellophane supported the self-service that led to supermarket growth. It also was the beginning of the end of smaller grocers.

We could say that the development of a transparent package was one reason millions of people had a new way to shop.

My sources and more: Always thanks to marginalrevolution for sharing unexpected ideas. Yesterday, their cellophane link created a new meaning for transparency. Much drier but chock full of detail, this paper on cellophane was also ideal. Finally, for more on Schumpeter, econlib is a handy source for economists’ biographies.  And, for even more, in this Teaching Company/History of Economic Thought course from Dr. Timothy Taylor, Lecture 8 on Schumpeter is excellent.