Milk prices are going up. And yet, in the US, we are drinking less milk.

According to Corey Geiger, managing editor of Hoard’s Dairyman magazine, one reason is oil. Countries in the Middle East with massive oil reserves have to import 90% of their food. That includes 9 pounds of dairy products for every person. Then, add to current demand a large, young milk drinking demographic in the Middle East and more milk drinkers in China, Mexico, Vietnam and Indonesia and you get a rosy future for US dairy farmers.

Recently, econlife suggested that we add beer to the Goldman Sachs spending ladder for emerging markets (below).  According to the American Association of Wine Economists (yes, really) the connection between beer and per capita income is an upside down “U.” As individual incomes increase up to $22,000, so too does beer consumption. Then though, when wine and spirits become affordable, people move from beer to pricier liquor. Currently, nations with emerging markets represent two-thirds of the world’s beer consumption.

Now, we should also add milk. 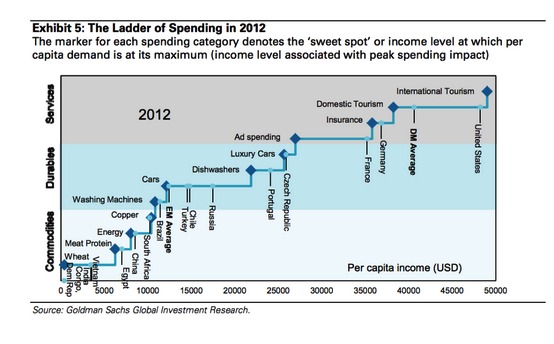 And finally, speaking from the dairy farmer’s perspective, Mr. Geiger answered why our ice cream will be more expensive. “The more exports that leave our shores, the less product at home. That helps buoy prices for all of us.”

Sources and Resources: As someone born and raised in and close to NYC, I find it fascinating to read the Wisconsin State Farmer although WSJ was where I first learned that milk prices were rising. You might also want to look back at econlife’s discussion of the ladder of spending in emerging markets and at demand for beer.

An excerpt from the econlife beer post was quoted above.

What is the Price of a Rain Forest?