An Easy Explanation of the Debt Ceiling

Two days ago, Treasury Secretary Janet Yellen sent a letter to Speaker of the House Kevin McCarthy. The letter said the U.S. government will max out its borrowing this Thursday. Having reached its “statutory limit,” the outstanding debt of the U.S. cannot go any higher unless Congress says yes.

Her second paragraph expressed the emergency:

“I am writing to inform you that beginning on Thursday, January 19, 2023, the outstanding debt of the United States is projected to reach the statutory limit.  Once the limit is reached, Treasury will need to start taking certain extraordinary measures to prevent the United States from defaulting on its obligations. “

Where are we going? To looking back and looking forward.

We need to borrow because government spends more than it receives. Sent to 66 million (or so) people, and adding up to approximately $102 billion, Social Security deposits are made on the second, third, and fourth Wednesday of each month. Your  date depends on your birthday. Also, the government pays for Medicare, submarines, and highway maintenance. It owes the President and National Park rangers their paychecks. And still there is much more. Asked if the government could prioritize its payments, the real answer is nobody knows. (This article makes it clear why.)

And that is why Janet Yellen wrote her letter. It is time for the Congress to give the Treasury permission to borrow more money. Otherwise, the Treasury Secretary said ehe has to take “extraordinary measures” to prevent a default.

So who has close to $31.4 trillion in government securities?

A large portion of the U.S. debt is held by foreign governments with Japan first and China close behind. After that, Belgium, the Cayman Islands, and Luxembourg are next, with Peru last in a 38 country list of the top U.S. foreign debt holders.

Why we have a debt ceiling

We have a debt ceiling because of a 1917 law. At the time, the Congress decided it was losing control of the volume of borrowing. To regain power over the federal purse and fiscal policy, they said, “We will decide the maximum amount the U.S. can borrow.” And from that day onward, whenever necessary, they voted to raise the debt ceiling.

Since 1980, the debt ceiling has steadily climbed. 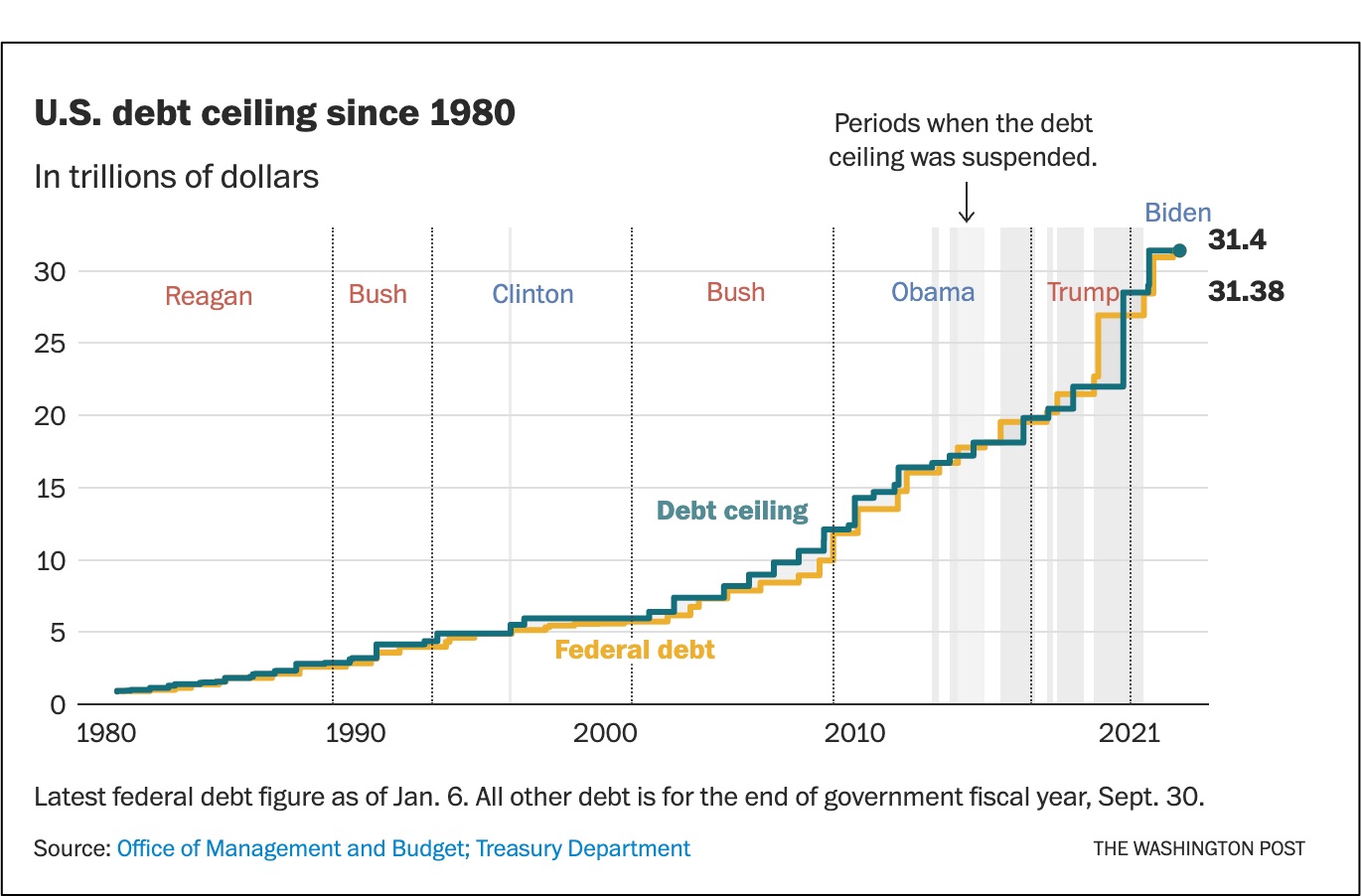 It sounds rather simple. But the politics have been unbelievable (actually believable). Repeatedly, different law makers have tried to attach conditions to debt ceiling legislation such as not building a National Highway system, Social Security changes, bombing Cambodia, voluntary school prayer and even a nuclear freeze.

During December, 2021, lawmakers kicked the can down the road. With just one Republicam vote, a Demicratic House and Senate raised the debt deiling by $2.5 trillion through a one-time majority vote in the Senate. They knew that within a year, the ceiling would again be too low. Now though, the ceiling legislation will originate in a Republican controlled House and a polarized Congress.

Reflecting the differences, these were the conflicting headlines.

Our first Secretary of the Treasury Alexander Hamilton believed that a national debt, as long as it was manageable, was beneficial. Reading about his plan to fund and refinance the United States’ revolutionary war debt reveals his commitment to establishing our good credit. His approach was varied, including issuing new bonds to pay for those outstanding and servicing the interest promptly on the foreign debt.

It worked. Even those in Holland, then the financial capital of the world, displayed confidence in our public credit. Adhering to the Hamiltonian philosophy, and knowing a default would raise interest rates and cascade the safety of U.S. bonds, the United States has never defaulted on its debt.

As did Hamilton, we need to borrow to uphold our obligations.

My sources and more: There are so many ways to look at the debt ceiling. We can consider the current situation in a news summary or through a Social Security example. Then, for more, do take a look at a slightly outdated CBO document, the CRFB, and, for a different twist, the current foreign holders of the debt.

Please note that this entry is an updated version of past notes on the debt ceiling. Also, it seemed appropriate that our featured image show the Capital rotunda ceiling.

Why Are Egg Prices Scrambled?