How We Should (Not) Respond to Stock Market Losses

In yesterday’s WSJ, journalist Jason Zweig tells us that to date, stocks are down 20 percent and bonds, 14 percent. If you own a 60 percent stock, 40 percent bond portfolio, your returns would have been worse only twice before. In 1931 and 1974, for the first three quarters of the year, investors were equally miserable: 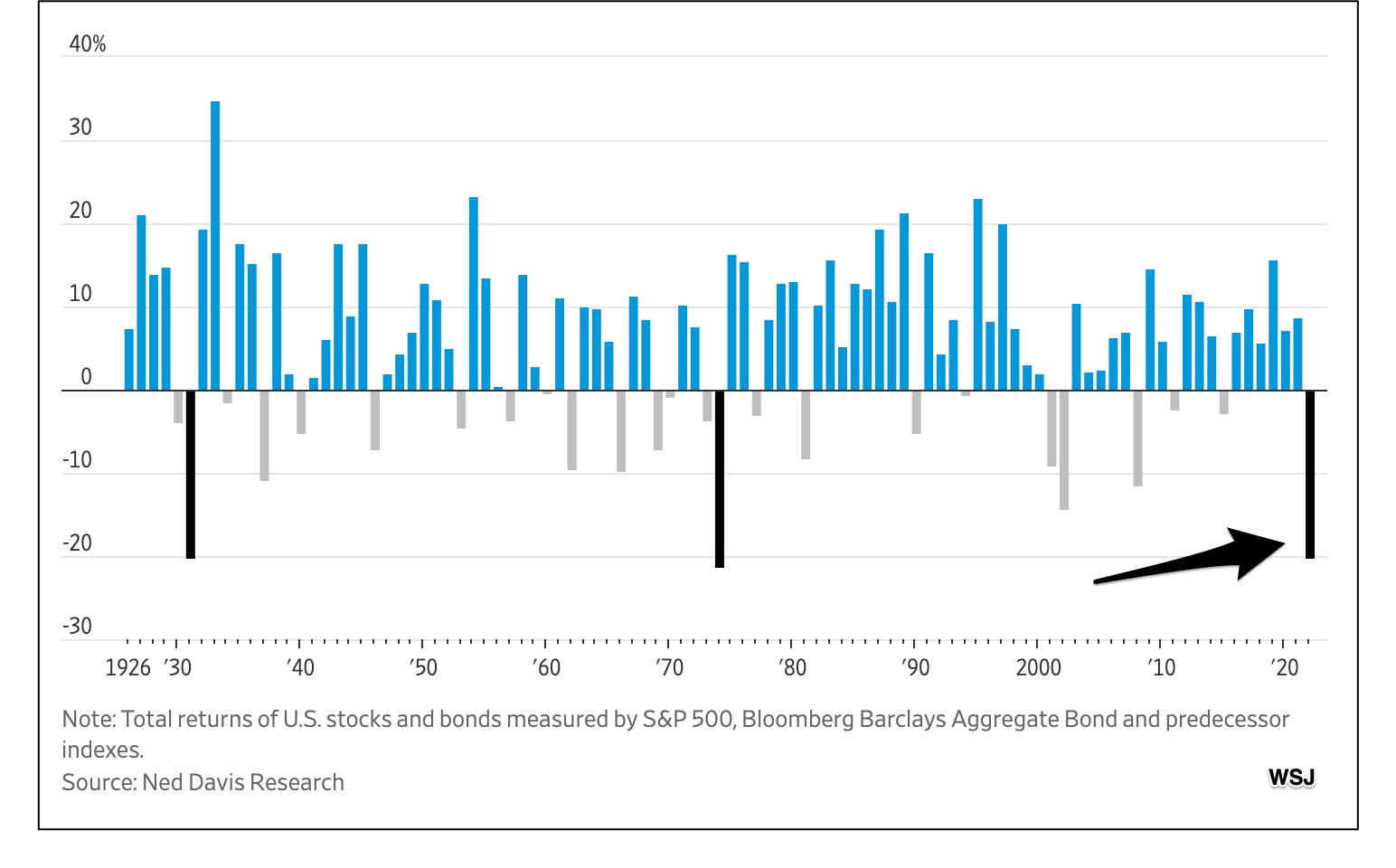 In a recent study, economists monitored how investors implemented a preset plan. Called their “loss-exit strategy”, they fully planed to sell what was down and keep their wins.

But they did not.

Instead they sold the winners too soon and held the losers.

The researchers looked at approximately 190,000 traders in 150 countries. Because the traders had to identify beforehand how they would manage their gains and losses, the economists could compare their plans with what they actually did. They could have, for example, been constrained by a loss limit of 10 percent and gains of 20 percent.

But here is where it gets interesting.

They could change their minds once they saw what how markets were performing. So, once a position sunk, rather than observing their sell commitment, they entered a larger percent. A loss limit of 10 percent became, for example, 20 percent. By contrast, they had a tendency to exit gains before the trigger set in.

Furthermore, the study suggested that the loss-exit commitment encourages risky behavior because investors know their losses are limited. So, when the EU tried to protect investors with a 10 percent loss level notification rule, they instead could have been doing the opposite.

University of Chicago economist John List suggests that investors ignore stock market fluctuations because they feel loss more intensely than winning. People who are down $1000 experience the drop more so than if they had been up by the same amount. The result? Most of us sell when stock prices plummet…precisely when we should be patient. Or, we hold on too long because we want to avoid the reality of a loss. Either way, the pain of loss makes us sell at the wrong time.

Called loss aversion by behavioral economists like Nobel economics laureate Daniel Kahneman, our desire to avoid a loss affects how we feel and act. For many of us, the dismay over losing a $10 bill exceeds the happiness we feel when we find one.

I suspect though that this picture provides the perfect definition:

And returns us to why our response to a bear market might not be productive.

My sources and more: Thanks to Jason Zweig’s WSJ column and his link to this paper. Meanwhile, in today’s post we’ve quoted sections of this past econlife on our response to soccer losses. For more, you might enjoy (as did I) this Washington Post Wonkblog’s soccer happiness study. Finally, for much more that relates to loss aversion, Nobel laureate Daniel Kahneman’s Thinking Fast and Slow provides the perfect look at behavioral economics.

Our Weekly Economic News Roundup: From Fat Bears to One Charger

The Problem With MoviePass