Why Tariffs Are Unfair

Our story starts with fishing reels…but only the cheaper kind.

A majority of tariffs–close to 60 percent– tend to be higher for lower priced goods than their pricier cousins. The tariff on imported plastic handbags is 16 percent while it drops to 5.3 percent for a more expensive leather bag.

History and a fishing reel can explain why.

Looking back, we need to recognize the industries that wanted protection and the concessions we gave to trading partners. For fishing reels, during the late 1930s, U.S. manufacturers made a low price good. As a result, they wanted protection against imports. By contrast, the more expensive rods–especially from the U.K.– had no domestic competition. Furthermore, the countries that made them wanted to favor their exports. The result is somewhat predictable. Cheap reels have had higher tariffs than the more expensive kind.

The blue line, below, illustrates the higher rates for cheaper reels: 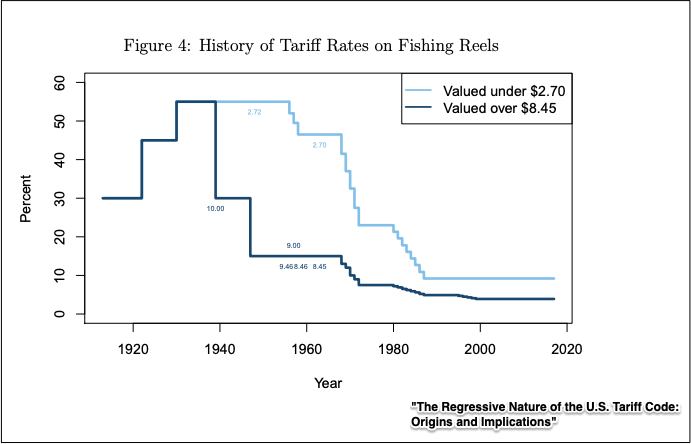 Tariff policy for forks (and a slew of other goods) followed the same pattern. Those that were lower priced had the high tariffs while, supporting foreign makers, the more expensive ones had a lower rate. 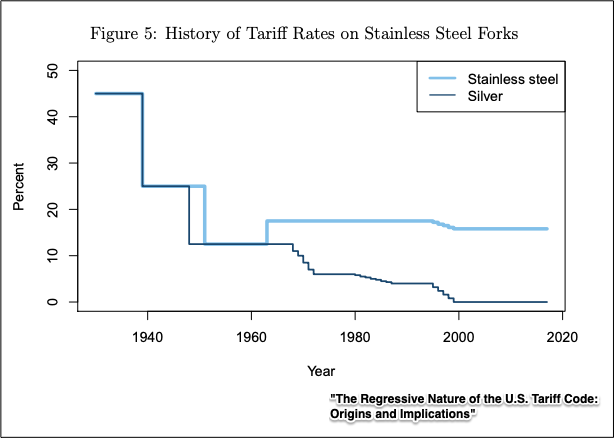 Then, adding to the illogic, for both fishing and reels, circumstances have changed. There no longer is a notable U.K. fishing reel industry to favor while for forks, there is no domestic industry to protect. But still the tariff differentials remain.

With a regressive tax, the results are the reverse. And for tariffs, it appears to strike the poor twice. We have many lower priced items having a higher tax rate. But then, those that are less affluent pay a higher proportion of their incomes also. Finally, making it even more egregious, they have no advocate to change policy.

I would call it unfair.

My sources and more: Thanks to PIIE’s Trade Talks podcast for alerting me to regressive tariffs. From there, I went to the research they recommended.

Why a Latte for the Loo Could Be a Problem

Where Inconspicuous Consumption Is Rather Obvious