PPE (personal protective equipment) nationalism was a problem during 2020.

During the earliest months of the pandemic, countries created export restrictions that were supposed to maximize the local supply of their PPE (personal protective equipment). Instead, they prevented the sharing that could even out distribution.  Then, making it worse, by limiting the size of a market, they created the incentive to produce less rather than more.

The worry elsewhere was that it would not stop with chickens. In Singapore, where one third of its poultry supply comes from Malaysia, some stores saw a run on chicken while others posted signs about limiting purchases. Making it worse, India has limited wheat exports and there was talk that Malaysian palm oil could be next.

Although Indonesia ended its temporary palm oil export restrictions, you can see that vegetable oil prices are up: 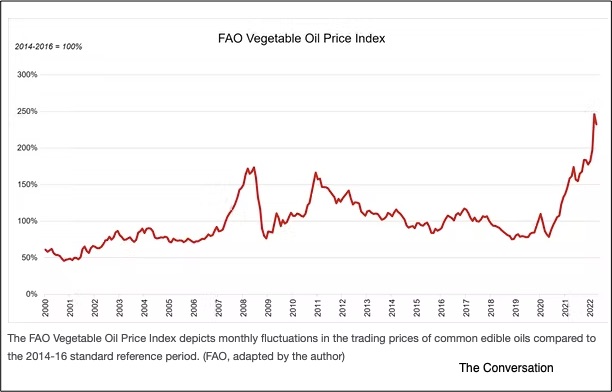 An economist would have said it sounds like the fallacy of composition.

Comparing the individual and the group, the fallacy of composition says that sometimes what works for very few people can be bad for everyone. In a movie theater, one person can rush for the exit if there is a fire. But when everyone tries, few can. If one farmer has a bumper crop, she can take advantage of high prices. However, when everyone harvests more, the supply curve shifts to the right and price plunges.

Similarly, temporarily, a single nation could benefit from banning a select list of exports. At the same time, they eliminate the synergy of sharing. However, a crisis trifecta–the Ukraine invasion, pandemic supply chain snarls, extreme weather- created the shortages that diminish the potential for cooperation.

My sources and more: Thanks to the BBC World Business Report podcast and this BBC article for alerting me to chicken nationalism. The perfect complement, The Washington Post had more of the details. But, if you are interested in palm oil, The Conversation had the facts.

The Sexist Side of Space Suits

How a Flamingo and a Bear Have the Same Problem