Now that most electric vehicles have no engine under the front hood, that empty space became our trunk in the front…our “frunk.”

New names are a small part of the huge changes that are transforming auto manufacturing.

GM has said it will be fully electric by 2035. This are the dates that countries are projecting: 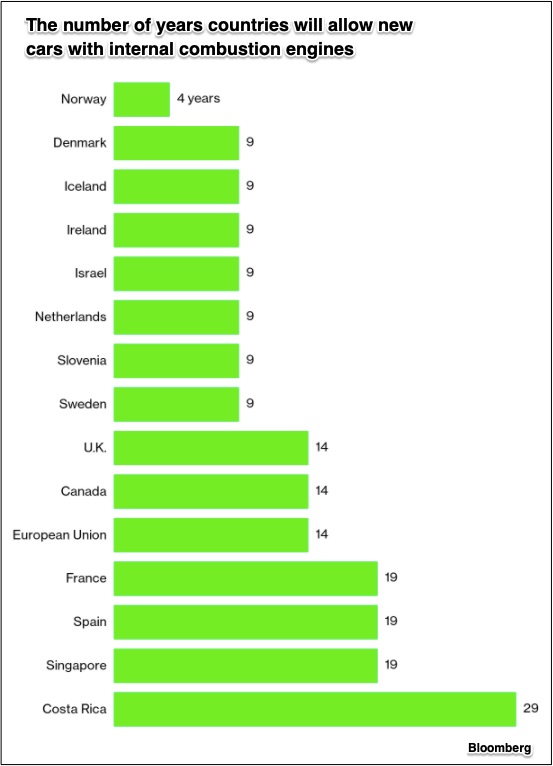 When automakers say they are switching to electric vehicles, the change sounds simple. However it is rather similar to what we have said about the coast of England. Viewed on a map, it is a curvy finite line. But then, as you zoom in, the coastline acquires countless zigzags that were invisible.

We could say the same thing about electric vehicles. Viewed by us, they seem similar to what we have always driven.

In the factory, it’s much more complicated. I’ve selected some examples of how land, labor, and capital will have to change:

Labor: From the corporate office to the assembly line, auto makers will need new skills. Recently Honda hired a CEO that specialized in electric vehicles. Similarly, we can expect job expertise to move from powertrains and internal combustion to software developers, electrical specialists, and battery experts. Audi’s engineers even needed to decide what their EV should sound like during acceleration. (They chose a helicopter whirring noise.) These changes will reduce the total number of jobs in the industry. The number could be as high as three million.

Capital: We could begin here with the suppliers of internal combustion engine parts. Expecting far fewer orders, suppliers are figuring out how to provide electrical components. More typically, a Michigan company that makes a complex spring used in 10 million vehicles annually might not be needed.

However, we will need a massive charging infrastructure, This is what already exists:

We can only begin to imagine the creative disruption that will come from EVs.

First explained by economist Joseph Schumpeter (1883-1950), creative destruction is about the new replacing the old. It is the painful process through which existing industries, their technology, and their labor force become extinct. But the happy side is what takes their place. As the fuel that propels the market system, creative destruction ignites economic growth. We got Model T Fords instead of buggies, computers made typewriters obsolete, and we have the electric vehicles that will diminish environmental problems.

Still, the transition will be tough. Perhaps though Sesame Street’s Kermit summed it all up when he said it was not easy being green:

My sources and more: It is always nice when three ideas converge. For today, it was GM’s 2035 promise. Next, WSJ has these articles, here and here, and here about eliminating gas engines. Then, Joseph Schumpeter’s creative destruction completed the picture. And finally, I should add that my Bloomberg Green email came in handy. (I recommend subscribing.)

Please note that parts of our creative destruction description were in a past econlife post.

Why Fortnite and Ferrari Became a Pair