You can see who was affected: 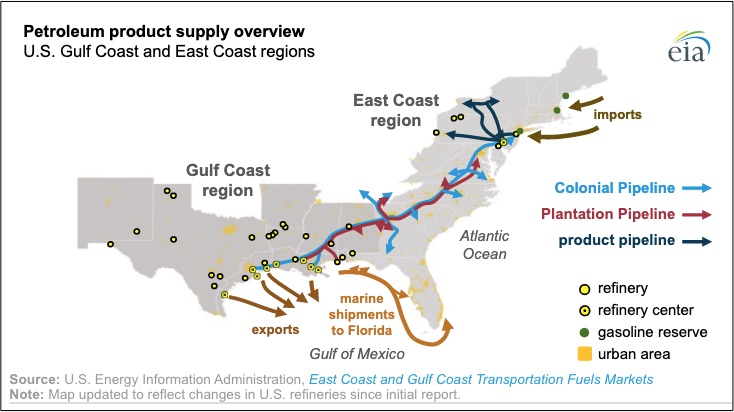 Responding, consumers rushed to gasoline stations.  Buying extra gas, they were probably creating the problem they were most worried about.

On March 4, 1933, visitors to President Roosevelt’s inauguration were told that they couldn’t pay for hotel rooms with checks from out-of-town banks. Confirming the precarious state of banking, two days later the new president declared a national banking holiday. He wanted people to know that after the holiday only healthy banks would reopen. Even more reassuring, a newly established Federal Deposit Insurance Corporation (FDIC) would guarantee deposits up to $2,500.

Bank runs create a self-fulfilling prophecy. Because banks make loans and other investments, they never have all deposits available for withdrawal. So, when their customers simultaneously want to take out their money, they won’t have enough at that moment. The result, during the early 1930s, was a cascade of bank failures.

The depositor mobs outside of banks were sometime overwhelming: 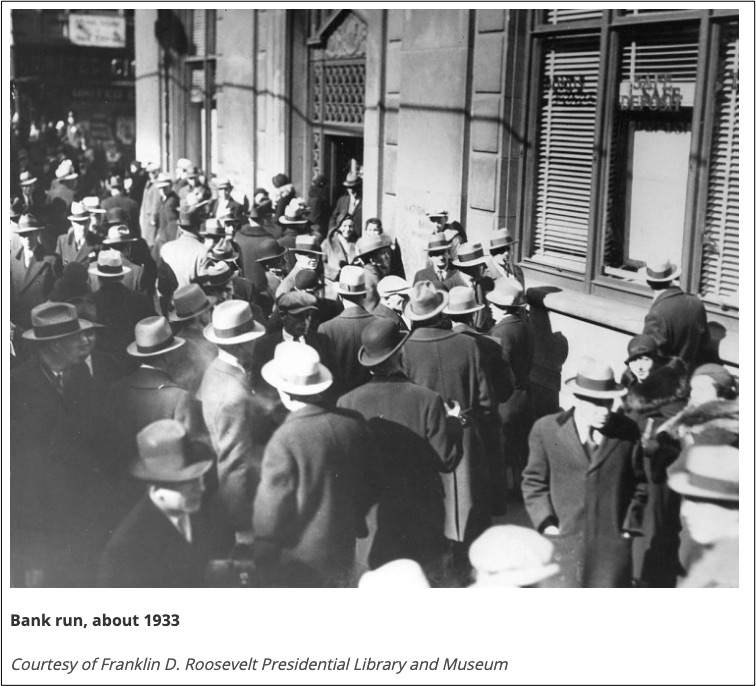 The solution was deposit insurance.  Designed to prevent the self-fulfilling prophecy of bank runs, the creation of the FDIC worked. Because people felt their life’s savings were protected by the government, they no longer rushed to withdraw whatever was available. Compared to more than 9,000 failures in the previous four years, only nine banks collapsed in 1934.

When the Colonial Pipeline responded to hackers with a shutdown and then (reputedly) a $5 million ransom payment, several states along the East Coast experienced panicked gasoline buying. The pipeline is the source of transportation fuels that include regular gasoline and diesel. Although they seem to have had inventory backup and a parallel line from Plantation, still it was not enough to prevent many gasoline stations from running dry.

The gasoline shortages were sprinkled throughout several southern states: 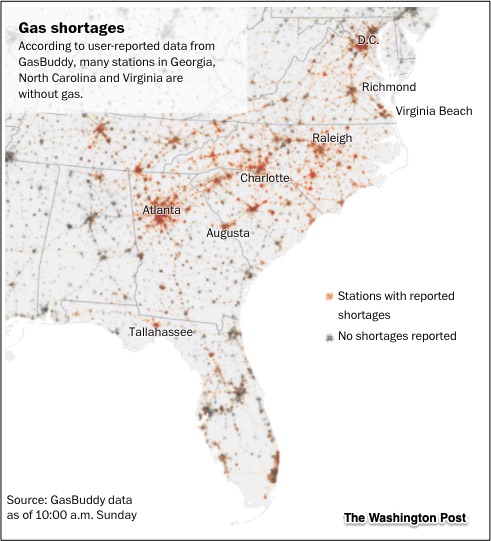 I wonder if, like the 1930s bank runs, the gasoline shortages were a self-fulfilling prophecy created by “gas runs.”

To restore trust in the banking system, the Glass-Steagall Act (Banking Act of 1933) included the FDIC as a provision. As a practical and psychological remedy, insuring accounts for $2,500 (now $250,000) eliminated the need to do panicky withdrawals.

Whereas banks are the heartbeat of a financial infrastructure, gasoline plays a key role in our transportation infrastructure. So yes, we do have inventory and a Gasoline Reserve. Also, Exxon and Kinder Morgan operate a parallel pipeline (Plantation).

But neither functioned as a reassuring backup that prevented our gas tanks from resembling our early 1930s bank accounts..

My sources and more: The eia (U.S. Energy Information Administration) is my go-to for gas and oil data. It had the East Coast map and many more facts about the gasoline supply chain. Then, for an update, The Washington Post had more of the hacking and reopening facts. Finally, this Globe and Mail column had my gasoline shortages theory.

An Innovation That Stuck

Why Our Chicken Wings Are Flying Off the Shelves