The banana we eat now is the Cavendish. Described as second rate because of its bland taste, the Cavendish was a back-up. It replaced the Gros Michel.

The Gros Michel was a super tasty resilient banana that didn’t ripen too quickly nor bruise too easily. Sadly, it succumbed to an incurable disease called Tropical Race 1 that spread through Latin America during the 1950s. The problem was how the Gros Michel reproduced. Since its cuttings were replanted, each new banana was just like every other banana. When the fungus struck, all were susceptible.

By the 1960s, the Gros Michel was history. Although the Cavendish was low in taste and needed pesticides and an ethylene gas ripener, it was a survivor. Having resisted the Race 1 blight, the Cavendish became the world’s banana.

Now though the Cavendish needs a back-up.

The world’s banana supply has been hit by Fusarium TR4 fungus. Limited to parts of Asia for several decades, in 2010, it started to spread. Shown by this map, the TR4 fungus is now in South America. The red triangles show plantations in Colombia have TR4, while on April 12th, Peru reported its first outbreak:

Ecuador is the world’s largest banana exporter. For those of us who need a geography refresher, do think sandwich. Ecuador is sandwiched by Colombia and Peru: 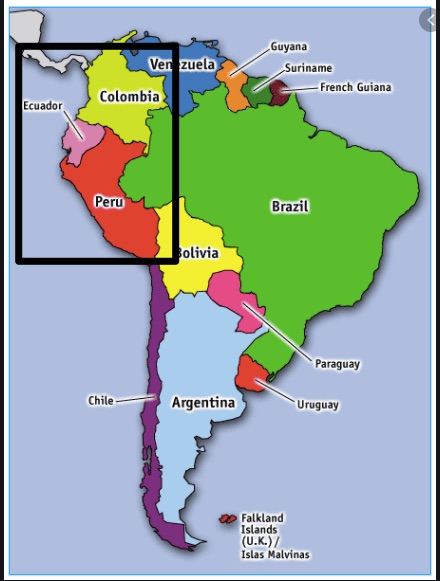 You can see where we are going. A soil borne fungus, TR4 can travel on shoes, clothing, in irrigation, on tools and vehicles. Fungicides don’t work. The only solution is containment or developing a resistant variety. Ecuador has increased its border inspections and encouraged more vigilant sanitary conditions. However, they know that they are next.

During 2020, Ecuador exported 380 million boxes of bananas. Sent mostly to the EU, Russia, the Middle East, and the U.S., Ecuador’s bananas were packed into massive refrigerated shipping containers called reefers. 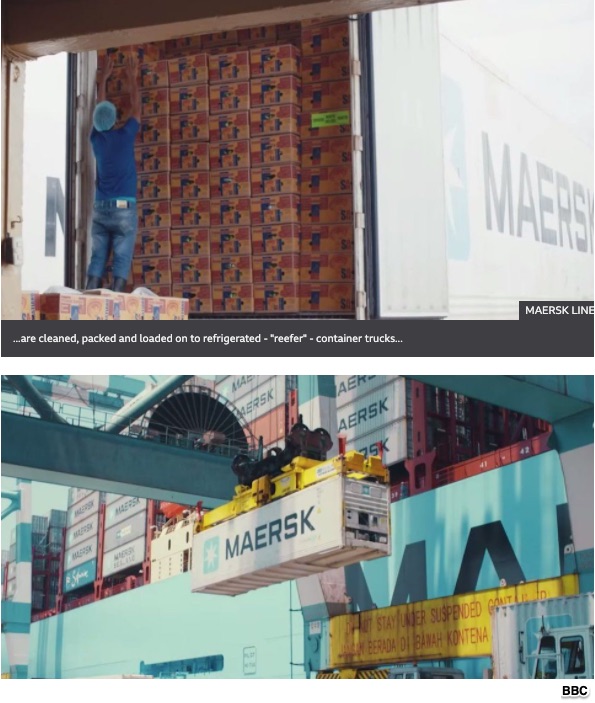 A New York bound boat from Ecuador could have 120,000 bananas in each reefer. After docking, the bananas have a radiation check, maybe a customs inspection, and then they head to a ripening warehouse for their ethylene fix. Like Goldilocks, the ripening rooms have to be just right. Too warm and bananas get mushy. Too cold and they are gray and rigid.

There actually is a ripeness chart. A seven is a banana wholesaler’s nightmare:

Like the switch from the Gros Michel, when the Cavendish becomes extinct, so too might parts of our supply chain.

Finally, for some fun and a taste of banana optimism, you might just watch the Sci Show:

My sources and more: Bloomberg Supply Lines had the banana update while 99% Invisible had the story of the reefer. Complementing Bloomberg, this produce website had current trade data and this website had more on TR4. From there, this map came in handy as did this paper. (As an update, sections from today were published in a past econlife post.)