During a 2007 episode of The Office, Michael Scott (Steve Carell) said Wikipedia was “the best thing ever.” His reason? “Anyone in the world can write anything they want on any subject.” The show’s writers thought they had Michael expressing one of his ridiculous statements. Instead, he was right.

We could say that, as a theory, Wikipedia makes no sense. But, in practice, it works.

Twenty years ago, Jimmy Wales and Larry Sanger were running an academic journal whose popularity had a tepid beginning, Characterized as a lark, they created the first wiki on January 10, 2001. Rather than academic rigor, the new site would have serially edited articles from voluntary contributors. By the end of 2001 they had more than 15,000 entries. It became Wikipedia.

Wikipedia’s bottom-up structure had an organizer and an owner. There were no shareholders, no billionaires, no ads. Wikipedia told contributors that it was not a dictionary, not a source collection, not a scientific journal. Entries just needed to echo Britannica, Nature even proved to an army of doubters that Wikipedia articles was almost as accurate as Britannica.

The 2006  Wikipedia was dominated by George Bush: 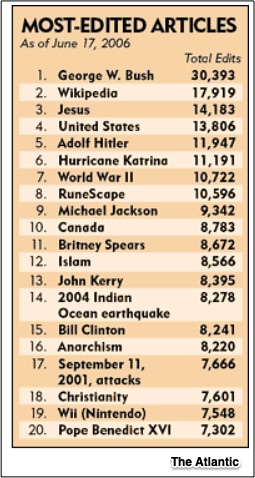 Now, Siri, Alexa, and many of us are Wikipedia regulars. It has close to 3.5 billion words, 1.6 edits a second, and 55 million articles. It is global: 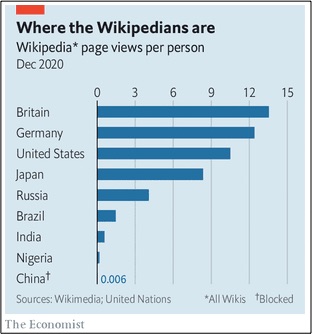 Wikipedia’s success reminds me of the market system where no one coordinates millions of people. Also similar to the market, Wikipedia has a gender bias problem. Men write 90 percent of all Wikipedia articles. In 2018, women were the subject of just 18 percent of Wikipedia’s English biographies. Among 135,000 active editors, less than 16 percent are female. They have many more articles on battleships than on poetry.

It all sounds rather similar to the NY Times “Overlooked” project. Looking back, the Times decided that most of their obituaries ignored women because they were written by people who saw the world through a male lens. Similarly, Wikipedia had “notable” characteristics that biased selection criteria. “Famous Beauties” used to be Wikipedia’s biggest female category. Do take a look at this Wikimedia Foundation article. They say they recognize the problem and have been trying to correct it.

My sources and more: Thanks to Marginal Revolution for alerting me to the Wikipedia history article in the The Economist. From there, links to The Atlantic were enlightening as was this Washington Post discussion of Wikipedia gender bias. And then, as the possibilities multiplied, I went to Smithsonian and Wired.

How Covid-19 Changed Our Spending