During 1995, Pepsi drinkers could trade points for “stuff.” According to the promotion, you got your points from buying Pepsi products. Then, you could trade the points for a variety of items. It was also possible to buy the extra points if you did not have enough to get the “stuff” you wanted.

Somewhat whimsically, Pepsi offered a fighter jet for 7 million points. When a customer showed up with 15 Pepsi points and then a check for the extra 7 million or so, Pepsi refused. Not only did they not have the airplane but also, the price was much too low. In Leonard v. PepsiCo, Inc., saying the promotion had not bound Pepsi to providing the plane, a judge agreed.

Similar to most of us, the people at Pepsi appear not to have understood large numbers. Or, as explained in Humble Pi, we will live through a million seconds in 11 days and 14 hours. However, a billion seconds takes us to 2052 (31 years) and a trillion, 31,000 years.

Below you can see a summary of the world’s vaccine deals in the Bloomberg Prognosis Vaccine Tracker. As of January 3, 2021, India had contracted for 2.2 billion doses. Meanwhile, Turkey, at the bottom of the list, will get 50 million: 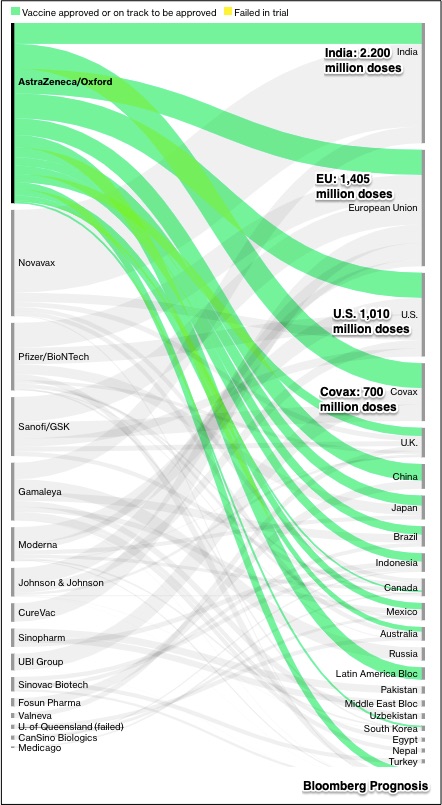 Except for the first two up-to-date dose totals, the following supply chain numbers are from mid-December. Even if some of the data has changed since then, they still convey the gargantuan character of the initiative:

So, you can see that the vaccine supply chain is about millions, billions, and trillions.

My sources and more: My vaccine data initially comes from my (un-gated) Bloomberg Prognosis email subscription. Then, supplychaindive has some of the numbers. Finally, for some fun math, do take a look at Humble Pi.

The vaccine featured image is from BioNTech.

Why a New Year's Resolution Needs a Staircase

Will We Have More Pandemic Babies?