The Problem With Plastic Bag Bans

The mustardy colors (below) indicate some form of plastic bag restriction and/or a recycling program. The blue shaded states have banned plastic bag bans: 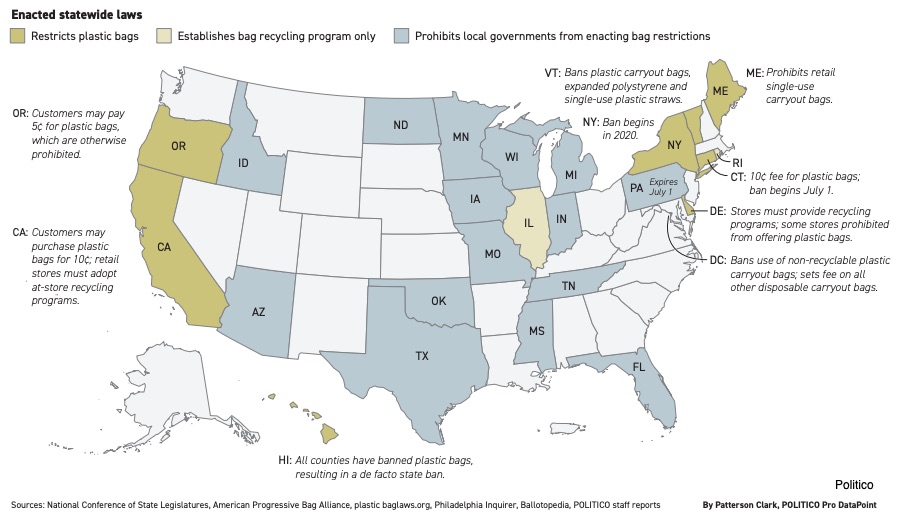 Meanwhile, my own state, New Jersey, has more than 46 municipalities limiting plastic bag use. And our state senate passed legislation that would ban single use plastic bags next year and paper bags in approximately 2023. However, the assembly is still squabbling over paper bags so we have no statewide ban.

According to recent research, their approach is all wrong.

Why We Need Plastic Bag Fees

Chicago had a single use plastic bag ban for chain stores that began during August 2015. Responding, consumers and merchants switched to paper bags and thicker plastic bags that created even more environmental problems. Yes people brought their own reusable bags but even they needed considerable re-use to compensate for the energy their production required.

So the city changed its mind.

On February 1, 2017, Chicago replaced the bag ban with a 7-cent fee. Within just one month the decrease was significant. After the first year, it was close to 28 percent. Asked why, consumers expressed all of the expected environmental reasons. But they only stopped using the bags when the fee kicked in: 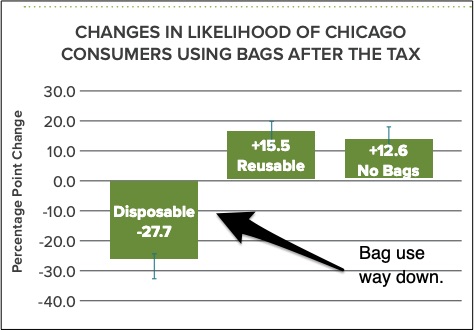 A behavioral economist can tell you why.

Called loss aversion by behavioral economists like Nobel economics laureate Daniel Kahneman, our desire to avoid a loss affects how we feel and act. For many of us, the dismay over losing a $10 bill exceeds the happiness we feel when we find one.

I suspect though that this picture provides the perfect definition:

Loss aversion can explain how we feel about a soccer game. You can see that the losers’ sadness exceeds the winners’ happiness:

And that returns us to plastic bags. Just 7 cents is enough to make us feel a loss that we want to avoid.

My sources and more: I recommend the Politico series on plastic bags while local news. reports had the NJ facts. But if you want the analysis of the plastic and paper bag fees, do look at this paper. And finally,  there is more on loss aversion in this Washington Post Wonkblog and the NY Times.

Do Economists Want Mandatory Medicare for All?