How the Location of Creative Talent is Changing

If you are looking for creative talent, a University of Toronto economist suggests you target occupations rather than college degrees. Otherwise you could be skipping too many people. The reason? People with college degrees are likely to be in the creative class. But 6 out of 10 individuals who do creative class jobs did not graduate from college.

Where are we going? To how the geography of creative talent has changed.

The Geography of Creative Talent

Between 2005 and 2017, the creative class was spreading. By 2017, cities like San Francisco, Washington D.C., Austin, and Boston could no longer claim a creative monopoly.

On our “before” map, approximately 10 U.S cities were creative job centers. They were the regions with the science, healthcare, business, tech, art, and science occupations. They had the educated professionals.

In 2017, the places with a vast proportion of creative talent increased. Reflecting a spread, the greater number of red splotches reflects a more highly concentrated creatively talented people. But also we have more orange: 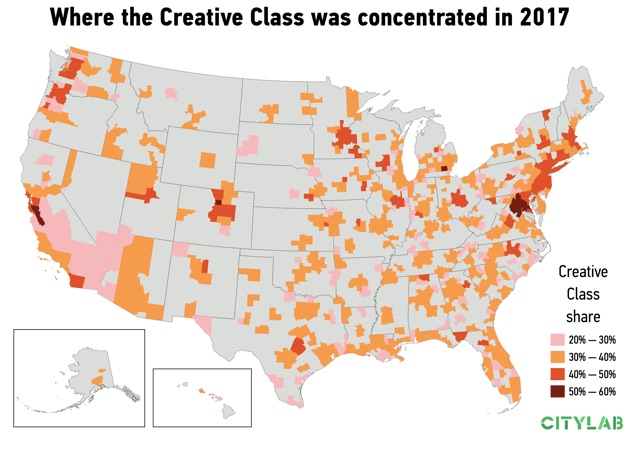 The 2017 map shows the same top five cities (in different order) with a higher proportion of creative talent in their population than in 2015:

The key difference though for 2017 is more orange. The change in color illustrates the spread to cities like Salt Lake City, Pittsburgh, and Cincinnati where the creative class is growing.

Because the jobs that require more creative human capital tend to have higher salaries and boost diversity, their spread should fuel economic growth in stagnating Rust Belt cities and other similar regions.

My sources and more: This City Lab article has a detailed look at the geography of talent. From there, if you want to read onward, Richard Florida’s research, here and here, digs deeper into economic geography.

The Spillover From Sorting (and Not Sorting) Trash