A Tale of Two Neighborhoods

In a three decade study that accessed census data from 20 million people, a group of economists followed children into adulthood. Their data ranged from income to employment to family size. They cared about race, gender, and incarceration rates.

Through a U.S. map, we can see generally what they found. The blue areas display more upward mobility than those in red: 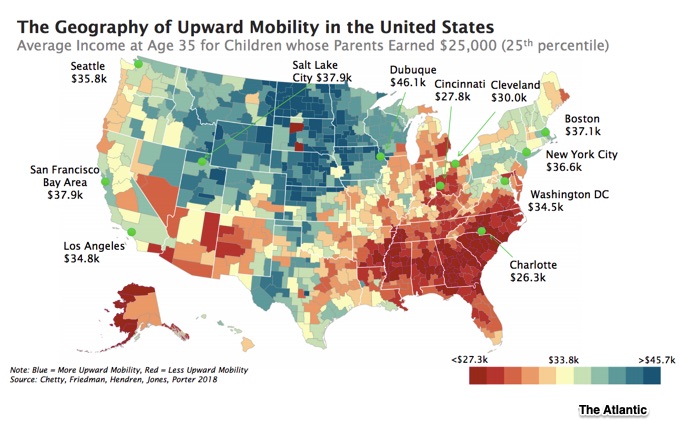 But also with their “microscope,” researchers zoomed in for a closer look.

Two neighborhoods can be 2.3 miles away from each other. Their demographics can be similar. And yet, income mobility can differ considerably.

We can look at Watts in central LA and Compton, CA, just 2.3 miles to its South: 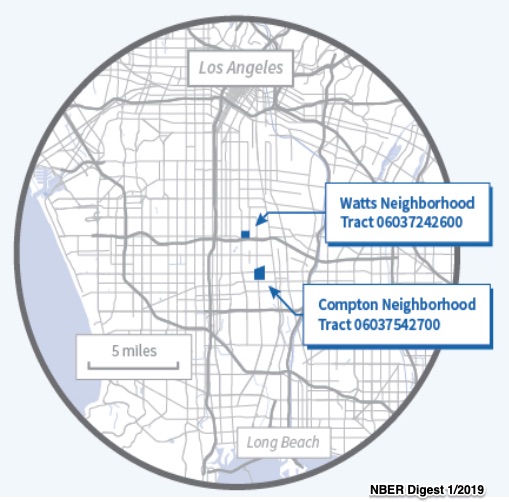 When Harvard economist Raj Chetty and his associates looked at households in the 25th income percentile in Watts and Compton, one focus was incarceration. Using data from April 1, 2010 (the day of the census) they saw that the incarceration rate in Watts for black males was 44.1% and for Hispanics, 4.7%. In Compton, on that day, it was 6.2%.

With incomes also, the gap was considerable. You can see below that the Compton average income numbers are almost triple those in Watts for the black males they followed: 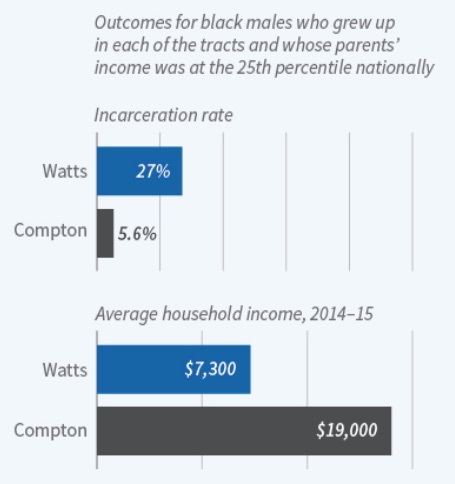 Asking why the difference, Raj Chetty and his co-authors suggest that the answers can be found in higher opportunity neighborhoods. Rather than focusing on poverty rates or job and wage growth, Dr. Chetty looks for parental employment and intact families. He also adds that higher opportunity neighborhoods have better schools, less income inequality, and more social cohesion.

Throughout the United States, higher opportunity neighborhoods are destinations that Dr. Chetty is helping U.S. policy makers identify. A program in Seattle is one example. He hypothesizes that low income families might not move to a higher opportunity neighborhood because they didn’t know about it. They might have not had the money to move or apartments could have been too expensive. Called friction, the barriers that made relocation difficult were eliminated in the Seattle experiment.

So far, research indicates that children who grow up in a higher opportunity neighborhood will elevate their income level as adults. The key then is to identify those neighborhoods…

My sources and more: If you read just one article, this Atlantic article is the one. Starting with Harvard economist Raj Chetty’s family in India, it connects his background to his current research. From there, if you want more about his research, do go to his most recent NBER paper. the NBER summary, and this article.

Why We Want Sneakers Made From Coffee

Will We Get a Space Force or a Space Corps?