If you had moved from New Orleans to Austin as a child, it’s more likely you’d have become an inventor.

Or, you could have grown up in the darker blue areas of the U.S.:

Where are we going? To why people invent.

All that we will consider today comes from the Equality of Opportunity project. Our story starts with “who.”

To figure out who invents, researchers started with a definition. Assuming that anyone with a patent was an inventor, they then accessed huge data. At first, they focused on income, race/ethnicity, and gender.

Looking at income, they discovered that 10 times as many inventors come from the top 1% as from below median income households. That works out to a patent rate of 8 out of every 1000 individuals for the most affluent: 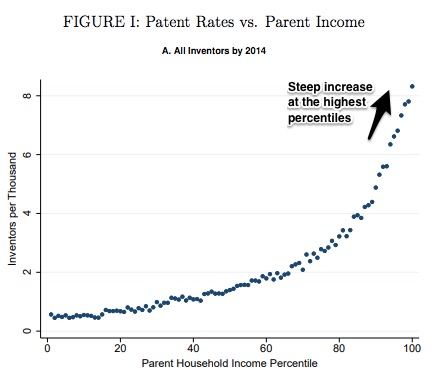 When they used race to sort inventors, the highest proportion was among Asian populations and then white. Comparing, we find 3.3 patents per 1000 for Asians and 1.6 for white, non-Hispanics. With Blacks and Hispanics, the totals drop precipitously to .5 and .2 per 1000 patents. 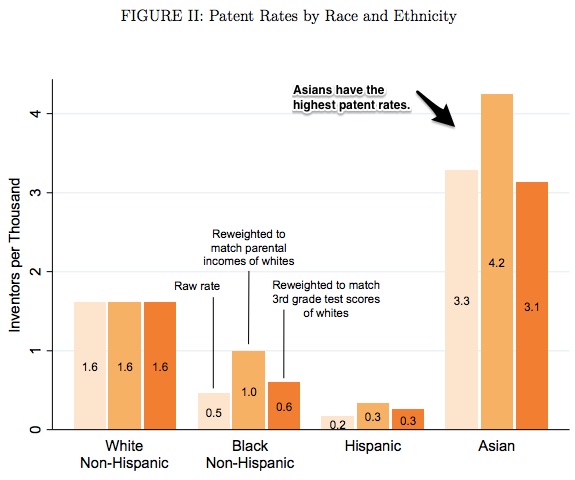 At 18% for a 1980 birth cohort, a disproportionately small number of women have patents. If the current rate continues, then we will achieve gender parity in 118 years: 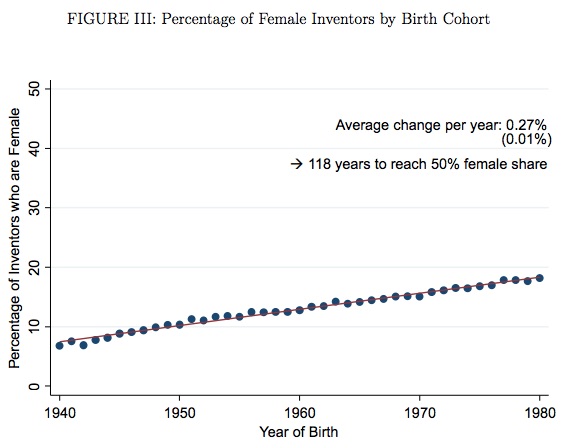 Why Do People Invent?

The next step was to ask why. If there are so many more inventors among white high income men, are they more able?

Here is where it gets interesting.

Looking at third grade math scores, researchers found that the scores of the most affluent males are higher. However, those scores were not nearly high enough to justify the gap in inventor totals. So, they had to look elsewhere. They wanted to figure out what made the difference if it was not ability.

Essentially, it came down to the people in your environment. If your parents and/or their colleagues were inventors, there was more of a chance that their children would be too, especially the boys. For girls, a female role model was a necessary ingredient.  Combine it all and you get commuting zones (CZs) that either are or aren’t innovation centers (as above).

The study even concluded that by the time individuals reach college and then labor markets, their trajectory is determined. It all related back to childhood exposure.

And that finally takes us to the practical part.

The authors of the Equality of Opportunity Project paper estimate that if minorities, women, and lower income individuals had the same patent rates as upper income white men, then the pace of invention would quadruple. As economists, we know that more invention fuels economic growth. So, our last question is asking how to jumpstart invention among the underrepresented.

Typically Congress focuses on the demand side. They establish tax credits, have contests, and fund programs that relate to research. Their goal is to create the incentives that should encourage invention.

However, the study we’ve described today (by an auspicious group that includes Stanford’s Raj Chetty) suggests the supply side might be more crucial. If we know why people become inventors, then we could create more of them. By increasing the supply of people who get patents, we can boost economic growth.

So where does that leave us? It takes us back to the power of the CZ zones where we began.

My sources and more: Always valuable, Raj Chetty’s research recently included invention but do take a look at his Equality of Opportunity Project for so much more.

Will Money Bring You Happiness?