The Scandal at the Master Sommelier School

If you pass the test–and very few people do–you can wear the Master Sommelier lapel pin. But this year, someone cheated.

In case you didn’t know (I didn’t), the Master Sommelier Diploma Examination has been given since 1969. And only 273 people have passed. Those at the pinnacle with the Master Sommelier designation earn yearly an average of $164,000. If you don’t have the two magic words, a typical top salary is $87,000.

People spend years preparing for the three-part exam. They try multiple times. They can pass one section and return to take the other two. And most fail. The easy part is paying $995 each time you try. You also have to pass three other lower level tests to ascend to the top exams.

Focusing on wine theory, the first Master Sommelier test is verbal. A second section targets restaurant skills with “restaurant wine service and salesmanship.” The third and last, just 25 minutes long, seems to be the big one. It is the tasting. The sommeliers are presented with six different wines that they have to “clearly and accurately” describe. You know–the grape variety, the vintage, the origin.

And that is where the cheating happened. Someone leaked the answers. Because one of the test takers took the tasting during the previous year, that individual passed the exam. But the other 23 people who passed were disqualified because no one knew who had or had not cheated. But they do know which test giver was the guilty one.

So, for the 23 who passed and were denied the designation, the Court says they will make it easy next time. They will refund the tasting fees, help pay for some travel, and offer the tasting exam twice.

This was the celebratory picture of the 24 who passed: 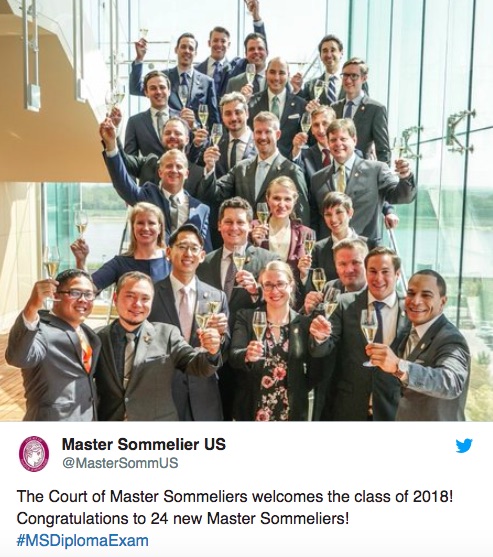 To acquire sommelier credentials, you attend (reputedly) demanding classes at “Somm School” that are offered by the Court of Master Sommeliers. There are four levels:

These are the lapel pins you get to wear as you ascend the sommelier ladder. I’ve pointed my arrow at the elite master sommelier pin that only those 274 people can wear. In the Americas there are 153 male and 29 female master sommeliers. 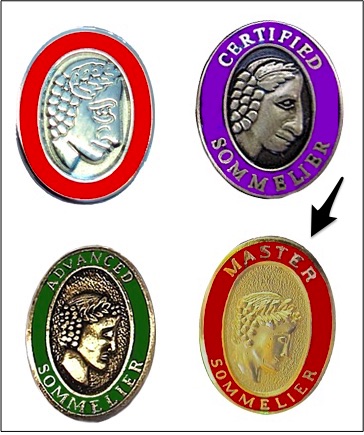 Reading about sommelier credentials, I thought increasingly about licensing. Although you are not constrained by government licensing regulations, the industry has considerable control over who enters their profession.

As an exclusionary status, sommelier numbers are limited. On the plus side less supply creates higher wages and quality. Because of objective standards, the doors theoretically are open to all who can pay for school. However, the status quo can also limit innovation and constrain labor markets.

My sources and more: Thanks to Eater.com for alerting me to the scandal and more from the Washington Post, From there, it made sense to learn more about the test and the training which I found in this paper on sommeliers’ brains. There also is more on blind tasting skill at the AAWE. Or, you can just take a look at the Court of Master Sommeliers and at professional drinking.com for more detail on the pins. Much less fun but interesting this Econtalk podcast talked about licensing.

Please note that there have been either 273 or 273 Master Sommeliers since the test began in 1969. I accessed both numbers and assumed that the Court had not included the newest person but am not positive.