Why We Have More Bananas

A New York bound boat from Ecuador could have four million bananas on board and some other cargo as well. After docking, the bananas have a radiation check, maybe a customs inspection, and then they head to a ripening warehouse for their ethylene fix. Like Goldilocks, the ripening rooms have to be just right. Too warm and bananas get mushy. Too cold and they are gray and rigid.

There actually is a ripeness chart. A seven is a banana wholesaler’s nightmare:

Where are we going? To why we have more fruit imports.

Bananas are one of many perishable commodities that need to survive a long journey to the U.S. However, it took moldy cocoa beans for researchers at Maersk (then Sea-Land) to wonder why some shipments arrived in good condition while others did not. They got their answers after seven years of research.

When Barbara Pratt graduated from Cornell in 1976, Sea-Land hired her to solve the perishable foods mystery. With a remote microprocessor yet to be invented, she had no precise way to monitor variables like temperature, humidity, and air flow. Instead, she and her associates did it themselves by living with the cargo in a modified mobile home/lab.

The result was a customized shipping container called the reefer. I took a peek at Maersk’s reefer specs and discovered that ice cream, oysters, and buffalo meat require -31°F. However, frozen tuna gets a -76°F super freezer that has an airtight membrane.

Reefers are one reason we can import a vast proportion of the fruit we consume like our bananas, limes and mangoes (below):

When we produce goods and services, physical capital plays a special role. Defined as the tools, equipment and inventory made by people, physical capital makes us more productive. Please imagine how building a water pipe saves you time and adds to your knowledge because you no longer have to walk to a stream.

Similarly, because the reefer made transporting fruits and vegetables more productive, we are importing a larger proportion of what we consume: 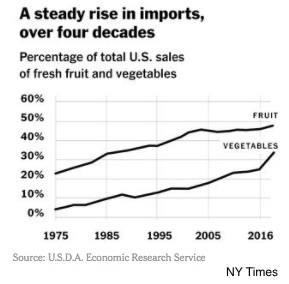 My sources and more: If you want to read more about reefer development 99% Invisible, Quartz and Maersk have the story. Also for good reads, I recommend the NY Times articles on the city banana and imported fruit. Finally, it was interesting to see what Maersk says about its reefers.