When the popular BBC soap EastEnders was over, close to 1.75 million people ran to make a cuppa. To satisfy peak (tea kettle) demand five days a week at one time, the British National Grid alerted backup stations and the French grid in case they needed them. It was called the TV pickup.

Where are we going? To natural monopolies.

Like the TV pickup, during a “Super Flush” our demand for water surges.

At the 2012 Super Bowl kick-off, the quantity of water NYC demanded to fill their flushed toilet tanks went up and down, depending on the action. It was down at the kick-off, down when Madonna performed, and at its absolute low during Mario Manningham’s sideline catch. Then, right after the game at trophy time, we had the super flush with 5.4% more demand than the previous week. The water in a local reservoir was down by two inches. Similarly, there was a super flush during the 2010 hockey final in Edmonton Ontario between the U.S. and Canada and also after the final episode of M*A*S*H.

To provide TV pickups and big flushes, we might need natural monopolies.

Public utilities require a massive capital plant and extensive transmission and distribution facilities. But they also benefit from a guaranteed market. Realizing this, government has given monopoly power to certain firms and also regulated them. Those firms could be called natural monopolies.

As you look at the graph (below), think AT&T’s monopoly before cell phones. At the time, duplication of the wires needed for phone service was wasteful. So too are the massive generators and nuclear facilities that generate electricity. We could add water to this list also. As a result, it could make economic sense for one firm to dominate a region or the country with its business.

Through an average cost curve that slopes way downward as scale increases, we can see the upside of a natural monopoly: 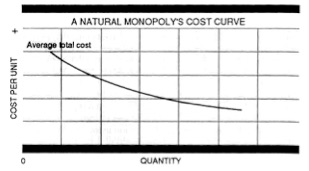 So, enjoying peak power and the super flush, we can thank our natural monopolies.

My sources and more: Always interesting, 99% Invisible started me on my path today. From Great Britain’s peak electricity, I went to New York’s Super Bowl and M*A*S*H. Then BusinessInsider was a good place to conclude because it focused on the ability of the utilities to handle peak.

Do note that not all economists believe natural monopolies can be beneficial.