The Codfather and the Tragedy of the Commons

New England fisherman have to purchase permits detailing what and how much they can catch. Although Carlos Rafael (aka The Codfather) had permits for haddock or pollock, his vessels sold close to 815,000 pounds of more expensive species from 2012 to 2016.

Lying about his catch, Mr. Rafael sidestepped the quota requisites and sold his fish in the black market. His trial is scheduled for March 30.

Fisherman get catch shares that designate quotas for haddock, crabs, flounder, cod and 13 other species. Based on fish stock estimates, the quotas converge conservation and property rights. Although the ocean belongs to all of us, they replace a “race to catch” with ownership incentives that encourage preservation.

In the northeastern U.S., the National Oceanic and Atmospheric Administration (NOAA) has overseen quotas since 2010. Seemingly simple, the system is much more complex. Assume you have a haddock quota, but your net pulls in cod as well. To sell that cod legally, you need to have bought a permit. Or, using the quota as a commodity, you could buy one from another fisherman.

And beyond that, the competition in the system is determined by the market share: 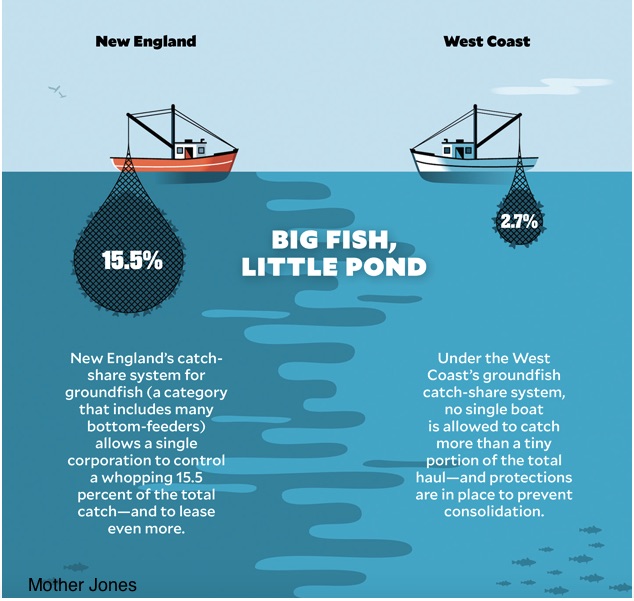 Still though, a (property) rights based system can elevate both the fish stock and profitability:

This is where the tragedy of the commons enters the picture. Whether looking at air pollution, an overgrazed pasture or overfishing, people have the incentive to abuse publicly shared resources. Privately benefiting from our behavior, we tend to ignore the impact of everyone using the resource together. The result is a tragedy of the commons.

Because a catch based system creates property rights, it diminishes the tragedy of the commons.

My sources and more: The perfect introduction to fishing quotas, here and here is the story of the Codfather. Next, I suggest the (always excellent) Conversable Economist for the economist’s perspective and this drier, much longer, fact filled paper. But if you read just one article, this Mother Jones story (“The Deliciously Fishy Case of the Codfather”) is wonderful. Please note that several sentences about the tragedy of the commons were in a previous econlife post.

How a Cherry Orchard is About More Than Fruit