Called “City Lights of Africa, Europe and the Middle East,” this dazzling NASA image of the earth is a composite formed from data collected by a satellite during 22 days and 312 orbits of the earth in 2012.

You can see that most of Africa is dark.  By contrast, Europe’s major cities like Paris, London and and Copenhagen are brightly lit.

Where are we going? To the impact of electrification.

Confirming the NASA image, the most recent data indicates sub-Saharan Africa is the least lit area of the world: 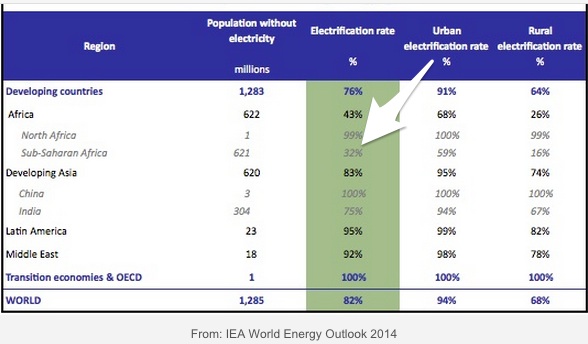 I also thought this map–the same area as the NASA image–could come in handy.

Light can be all about productivity. In one of his farm journals from 1813, Thomas Jefferson points out that one-half more wool was spun during July than in January because extra daylight hours extended the length of the workday.

So, when we think about where the earth lights up at night, we can also imagine more productive economic activity.

The Significance of Potty Parity