The Vaccine Benefits That No One Talks About

On July 16, 1776 John Adams received a letter from Abigail’s uncle saying that she, the children, and other relatives (17 of them) were in his house in Boston for their smallpox inoculation because of an outbreak that threatened all of them. Distraught, Adams said he had to remain in Philadelphia because he was “…in the midst of scenes of business, which must not stop for anything.”

In John Adams, David McCulloch tells us that the procedure was “to make a small incision, then with a quill scoop the ‘pus from the ripe pustules’ of a smallpox patient into the open cut.” The goal was to create a mild case of the disease that developed the patient’s immunity. Adams’s family all recovered from an ordeal that he believed everyone should undergo.

John Adams wisely recognized the health benefits of vaccination. By choosing inoculation though, the Adams family was also helping the economy of their developing nation.

The Economic Impact of Vaccination

Researchers at Harvard used data from the Philippines to hypothesize that vaccinations have an impact on human capital development. Although they point out that their data is not sufficiently definitive, they cite vaccinated children’s test scores to show they fare better than a non-vaccinated control group. Consequently, they say, healthier children attend school more frequently, fare better in school and as a result, learn more. As adults, they then are able to be more productive at work and to earn more and to live longer.

Furthermore, vaccinations diminish family size because more children survive beyond five years old and smaller families mean more attention is given to each child. On the national level, as we saw with the Ebola outbreak, disease affects the level of foreign direct investment and tourism.

Here is a broad picture of the income to health connection… 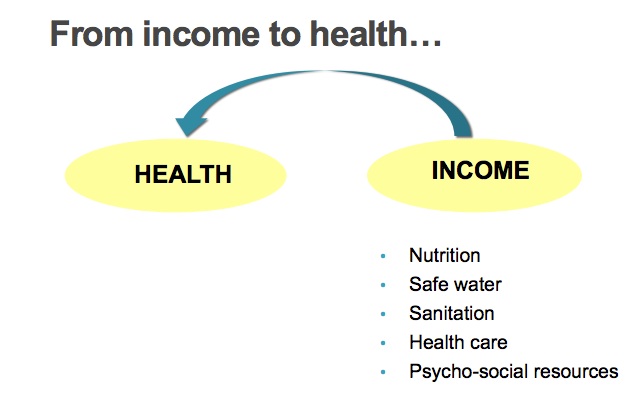 And the synergy they create… 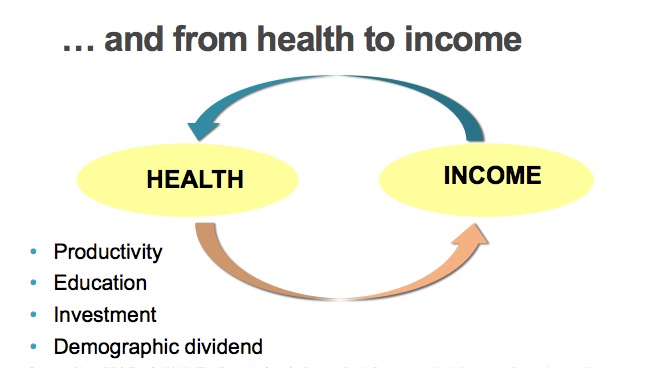 In The Wealth and Poverty of Nations, Harvard professor emeritus David Landes says, “Institutions and culture first; money next; but from the beginning and increasingly, the payoff was from knowledge.”

The payoff is a ripple of positive externalities. We start with a child who is vaccinated. Avoiding a host of childhood diseases, that child can benefit more from school and share her learning as a daughter, a worker and a mother. Looking at its ROI (return on investment), for developing nations like the U.S. 250 years ago or in contemporary Africa, vaccinations help the economy.

A Renewing My License Story

The Importance of a Good (Voice) Pitch