The President of Estonia said that because of Mrs. Cummings’ 8th grade math class in Leonia, New Jersey, he rejected Finland’s offer to give his country a free analog phone system. Vintage 1970s, the system was far superior to the 1930s technology in Estonia but the President, Toomas Hendrik Ilves, and other officials, said no. Having started programming in his 8th grade math class and then continuing through his undergraduate years at Columbia, Ilves understood that Estonia had to leapfrog old technology and head straight for digital.

Where are we going with this? To Estonia and their parallels with the U.S.

During the past 2 centuries, Estonia has had somewhat of a boomerang relationship with Russia. After 200 years of Tsarist Russian rule, as WW I ended they declared independence but reentered the Soviet orbit after WW II. When 1991’s dissolution of the Soviet Union again untethered them, they were mired in 1930s technology.

I guess the good part, though, was they could piggyback a state-of-the-art infrastructure on top of the 50 years of progress they missed. Rejecting Finland’s outdated technology, they built free nationwide WIFI, established online based finances for the government including tax collection (of a flat tax–really easy compared to Ilves’s experience with the IRS) and instituted a computer-based curriculum in the schools. Such a human capital foundation has meant the emergence of a Silicon Valley culture and the development of Skype by a Swede, a Dane and Estonian engineers. Now owned by Microsoft, Skype still has a main office in Estonia.

Meanwhile, Estonia’s market statistics have been pristine to some and controversial to others. With eurozone membership central to their agenda, on January 1, 2011, they needed new wallets because the switch from the kroon to the Euro meant the size of their currency had changed. #11 in the Index of Economic Freedom–the U.S. is #12–and #22 out of 189 countries in the World Bank’s Ease of Doing Business Index, Estonia has embraced the market.

She also has been a “poster child” for austerity advocates because of her response to a 2009 recession. Rather than borrow more, Estonia froze pensions, lowered government salaries and upped a value-added tax. Growing by 2.3% in 2010, she reversed a 14% GDP dive that soon climbed further. 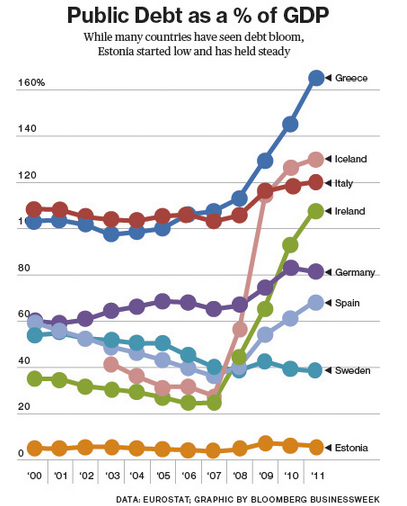 We should note though that when NY Times columnist Paul Krugman belittled Estonia’s numbers, President Ilves responded with some angry tweets. Below, the Washington Post quotes some of the exchange:

“The Nobel-winning economist blogged Wednesday that he’s unimpressed by Estonia’s so-called recovery: ‘This is what passes for economic triumph?’ Ilves shot back in a series of angry tweets: ‘Let’s write about something we know nothing about & be smug, overbearing & patronizing; after all, they’re just wogs.’”

Because of President Obama’s recent visit and guarantee of U.S. support, I wanted to share the economic philosophy that we share with Estonia.

Please note that this post was edited after publication.

A Tale of Two Cities... and One Mall

Weekly Roundup: From Wimbledon to Estonia