Why We Should Worry About Our Bananas

This disease is spreading around the world. Infecting millions, it can be caught through “stealth transmission” and has no cure. Sound familiar? No, it’s not Covid-19.

The disease is Tropical Race 4 and the patient is the banana.

The banana we eat now is the Cavendish. Described as second rate because of its bland taste, the Cavendish was a back-up. The banana it replaced sounds wonderful.

Until 1960, most people ate the Gros Michel,  A resilient banana that didn’t ripen too quickly nor bruise too easily, the fruit reputedly was super tasty. Sadly, it succumbed to a disease now called Tropical Race 1 that started to spread during the 1920s. The problem was how the Gros Michel reproduced. Since its cuttings were replanted, each new banana was just like mom and dad. All were identical. When the fungus struck, all were susceptible.

Now though, because every Cavendish is genetically identical, it too is being gradually obliterated by a new fungus, Tropical Race 4 (TR4). The back-up banana? There is none.

If you look at the following map from a 2017 econlife post, you see TR4 red markers in Asia and Africa. No one wanted to see them spread to Central and South America. But it has:

On August 8, 2019, the Colombian Agricultural Institute declared a national emergency after confirming the presence of Tropical Race 4. The fungus typically stops infected plants from bearing fruit. As one scientist explained, “Once you see it, it is too late…” A group of scientists in Australia say they could have a new disease resistant variety in 2023. All though are concerned with the consumer reaction to a new taste.

U.S. bananas come from Central and South America where growers feel the pressure. Worried that TR4 will soon travel to them, they have little ability to raise prices and diversify:

Meanwhile, globally, Covid-19 is compounding the banana’s problems. The world’s second largest exporter, the Philippines, said its shipments could go down by 40 percent because of Covid-19 lockdowns and precautions that constrain production and transport.

The result has been higher prices in China: 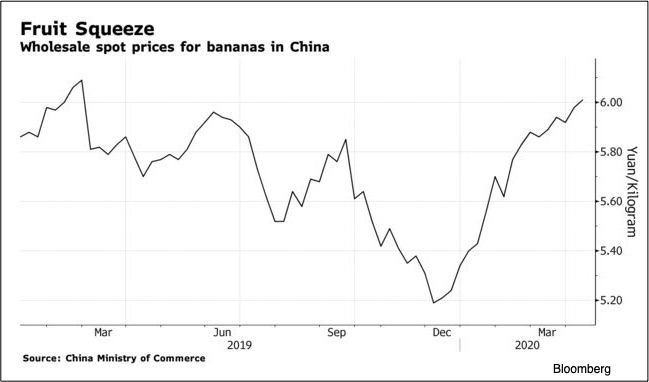 My sources and more: This Wired article is a good source for more banana history while a banana entry in the Quartz “Obsession” series had quite a few quirky facts. Then, for more, foodnavigator had the research, and the BBC and Bloomberg had an update as did this Throughline podcast that I especially enjoyed. (Please note that some of my banana history was in a previous econlife post.)

Finally, for some fun and a taste of banana optimism, you might just watch the Sci Show:

When the Good Life Is About More Than Happiness