Imagine a play about soybeans.

The stars are the United States and China while Brazil and Argentina play the supporting roles. In the first act we have a ship racing to China. Loaded with U.S. soybeans, after a one-month voyage, the Peak Pegasus is close to beating China’s 25% retaliatory tariffs that start the next day at noon. The world is watching.

This was the location of the Peak Pegasus on July 6, 2018, the day before the deadline: 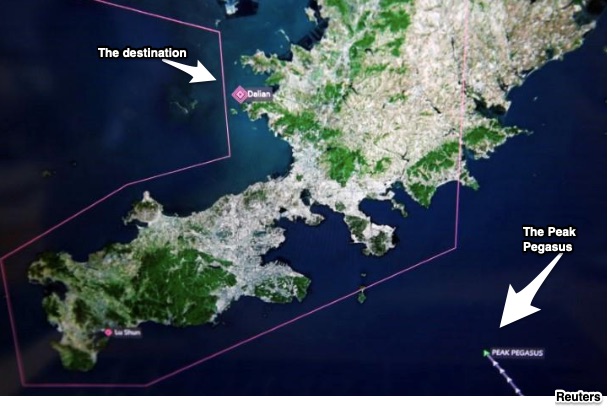 The leading producers of soybeans are the U.S., then Brazil, with Argentina a distant third. China is the big buyer.

Pigs, chickens, and cows are massive soybean consumers. Much more than the people who enjoy tofu and soy milk, a huge population of animals eats soybean meal. That takes us to China where increasing affluence has led to more meat consumption and therefore, more animals. To feed their livestock, China was buying 60% of all U.S. soybean exports.

After the U.S. tariffs hit their exports, China looked elsewhere. During our second act, U.S soybean prices descend to 10-year lows. The reason? A massive decrease in U.S. soybean exports to China: 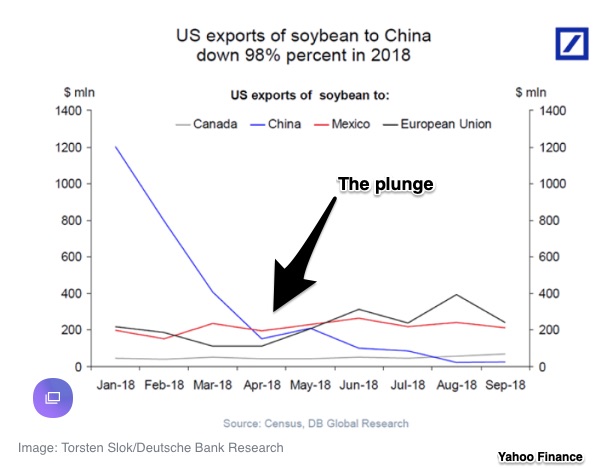 We should note that during December, 2018, China resumed some soybean purchases. According to Trade Talks, the buying interest solely came from SOEs (state-owned enterprises) which then received a payback from the Chinese government for the tariff. Offsetting that increase, China’s soybean needs have somewhat diminished because of African swine fever hitting its hogs and a new hog feed formula with less soy protein (not a good idea).

Meanwhile Brazil has seen its soybean exports to China soar by 22% (January to September, 2018 compared to 2017). Summarizing a headline from CNBC,  Act 2 could be called “Gloom in Iowa, Boom in Brazil.”

We used to have a global market in which soybean farmers in Brazil, Argentina and the U,S. kept an eye on each other. Brazil harvested from February to May; Argentina, between April and June. Because Americans start planting in the spring, they could react to what the South Americans had produced. For example, after the 2018 Argentine drought, American farmers planted more. But then China’s tariffs complicated their plans.

For now, many farmers have some of their soybeans in storage. They are hoping for higher prices.

My sources and more: This Trade Talks podcast from the Peterson Institute had the overview. The perfect complement, Reuters then took me to the Peak Pegasus. In addition, this 2018 FAS report from the U.S. Congressional Research Service had all you could ever want to know about crop production and CNBC had the most recent soybean update. Reading all, as a suburbanite from New Jersey, I got a good picture of the plight facing our farmers.

The Value of the Brands We Love the Most

What Avocados, Salmon, and Butter Have in Common