Looking At The Big Picture in the Movie Industry

Hollywood has been increasingly relying on the big picture.

So far this year, box office sales are up 5%. But it’s all about Black Panther (3rd highest grossing film of all time in the U.S.) and Avengers: Infinity War (already the 8th highest movie of all time).

So we can ask if it’s true that the industry is dying.

Up is the only word that can describe the quality and quantity of movies we can watch at home. Top stars want to be in TV shows whereas before they said no. Our equipment is also so much better.

Still though we are going to the movies. But not like we used to go.

We are seeing fewer movies a year. In 2017, the average was 4.7 movies, in 2016, 5.3, and 5.8 is the nine-year average. However, when you define movie goer as someone who has seen at least one movie in a theater during the year, the total is rather high at 76% of the population. 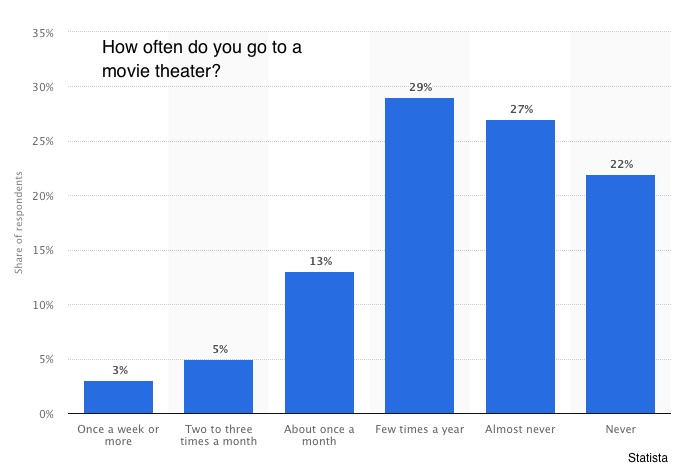 But age does matter. Driving growth, seniors over 60 have upped their movie attendance. So too have 25 to 39 year olds. However, for very young children (but not teens who keep going), 18-24 year olds, and the 50-59 group, attendance is down.

Where does this leave us? We could say that the numbers are up and frequency is down. People are going to the blockbusters.

Although the following numbers were from 2015, they are even more true today:

The movie industry is not taking all of this lying down. They are reclining. (Sorry, could not resist.) By the end of this year, recliners should represent close to 45% of the seats in the major theater chains (which means they have decreased the total number of seats by close to one half since the recliners take up much more room). Meanwhile, we had the switch from film to digital, more cocktail and food service, discounts for seniors, matinees, and sometimes on Tuesdays. And we’ve already looked at the MoviePass subscription model that others have begun to tweak. 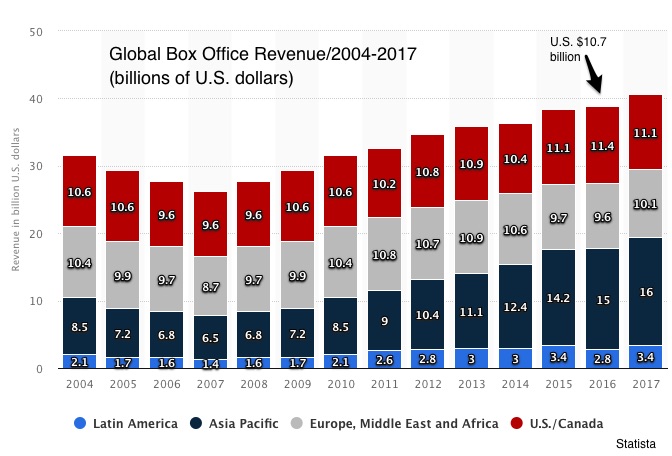 I wonder whether the Mark Twain quote should come to mind: “The reports of my death have been greatly exaggerated.”

My sources and more: Thanks to the Goldman Sachs podcast for its movie industry discussion. Their message that the movie industry was not close to dying took me to this Hollywood Reporter article, to Fortune, and to Statista.

The U.S. Army's War Against the Vegas Golden Knights