The Unintended Consequences of Airline Taxes

U.S. airports say their aging facilities need money for a facelift. But the airlines, worried about higher ticket prices, have said no.

What they did not say is that there could be unintended consequences.

First though, let’s look at what our fares include.

Currently, a typical $300 air fare includes $63.35 in fees and taxes that mostly go to the Federal Aviation Administration (FAA) for federal oversight expenses, for security, and yes, to the airports through a passenger facility charge.

Someone flying from Peoria, Illinois to Raleigh/Durham with a stop in Chicago, on a $300 ticket (sold 1/1/17), pays the following fees and taxes. (If the new airport fees are approved, they would be added to the passenger facility charge): 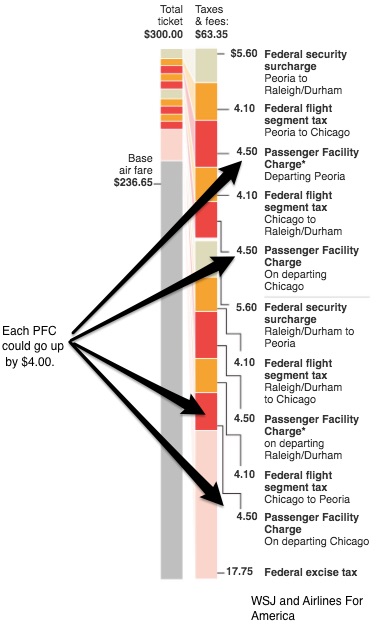 The problem for the airlines is that a new fee will look like a fare hike. Since 2012, the Department of Transportation (DOT) has required the airlines to include mandated taxes and fees in airline fare totals. They believed that listing them separately was misleading travelers about the cost of the flight.

But here is where it gets interesting.

Economists are hypothesizing that those fees and taxes have constrained airlines from raising fares. Sometimes they have even absorbed some of the expense. However, that has not meant they were willing to accept less revenue.

Instead, as you know, airline fees have multiplied. We pay extra for services that range from seat upgrades, checking baggage and ticket changes to expedited security check and earlier boarding. United and American even just added an overhead baggage bin fee for customers paying their rock bottom Basic Economy fare. United calls it a gate-handling charge and American, a gate-service fee.

The airlines are worried about their bottom line. They estimate that when price goes up by $39, our quantity demanded drops by 4.4-5.1%. Expressed somewhat differently, Delta tells us that their quantity demanded decreases by 1% from a $1 ticket increase.

As economists, we can say the airlines are talking about their passengers’ price elasticity of demand. Thinking about a large quantity dip from the price hike, they are worried that total revenue will go down.

And that takes us to unintended consequences. To offset the lost revenue, airlines are proliferating fees–not what the DOT expected when they mandated “Full Fare Advertising Rules” in 2012.

And not what they want if they increase the airports’ passenger facility charge.

My sources and more: Of course, a WSJ article on a new airline fee is only the tip of the topic. From there, I located the original data in the WSJ article and lots more at Airlines for America.  But for the best analysis this paper is my recommendation. And for a good fee story, do look here at WSJ  at what Scott McCartney says. His airline industry columns are always the best.

The Economic Yardstick That (We Don't Know) We Need