An idyllic mountain village wants you. The town has one shop, a church, houses that have been there forever, and a population that has shrunk to 240. It is located in the Swiss Alps.

Albinen’s plusses include clean air, magnificent views, and close to six square miles of farmland and forests. However, $70,871 is the most compelling reason you might want to move there. If a family of four agreed to build or buy a house and remain in Albinen as full time residents for at least 10 years, they might pay you a whopping sum. Next week, their council will vote on the idea.

While Albinen is a rather unique municipality, its plight is not. Shrinking cities are a growing economic problem.

According to the UN, the population of Yichun, China declined by 110,000 between 2005 and 2015. Its probable cause was the catastrophic deforestation that followed a logging boom. Similarly, cities in China’s rust-belt have been declared “resource-depleted” because of environmental devastation and bankruptcies.

In the U.S. we too have rust-belt cities that propelled the nation’s economic growth and then struggled with a massive exodus. FT expressed the cycle of compression perfectly through four words: “recession, shutdowns, bankruptcies and layoffs.”

In this graphic, you can see some of the places that share shrinking population problems: 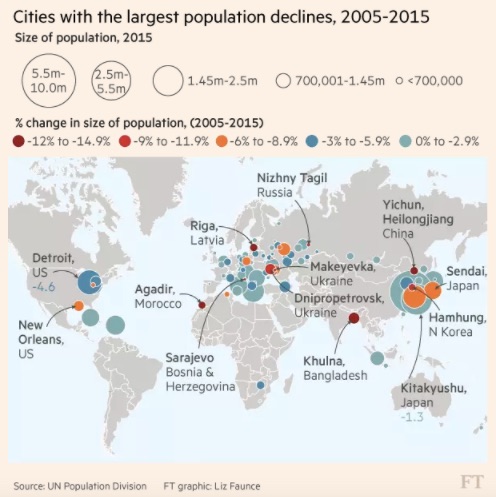 As economists, we could say that we have shrinking populations because of structural shifts in the ways we use land, labor, and capital. The U.S. rust belt provides the perfect example. Among the first to industrialize, rust-belt cities focused on what they did best. However, when the world moved on, many of those cities could not. A changing economy rendered those early leaders obsolete.

Returning to Albinen, we cannot say that a rustic village became obsolete. But they too suffer from the allure of more vibrant alternatives.

My sources and more: Thanks to marginal revolution for alerting me to this Albinen article. It was an easy leap then to the larger implications of shrinking cities.

Econlife Quiz (2017): Do You Know Your Thanksgiving Economics?