Does the Ivy League Diploma Matter?

Groucho Marx once said, “Money frees you from doing things you dislike. Since I dislike doing nearly everything, money is handy.”

Where are we going? To whether college applicants would fare best at an elite school because they care about their earnings.

Let’s start with an idea of how many people we are talking about. You can see below that the numbers are relatively small. 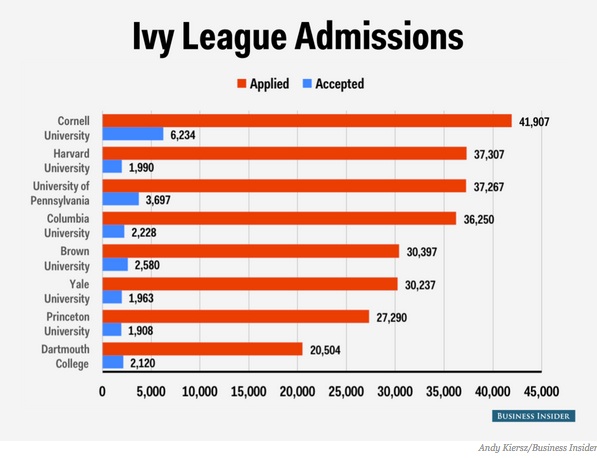 In addition to the Ivy League, we can add schools that are also elite because they too attract the top one percent:

Now we can go to jobs to see where the elite college grads work. Considering the small number of acceptances, you can see their disproportionate presence in high paying, powerful positions.

But, does this mean that the elite school diploma is the reason for their grads to be in those higher paying jobs? According to the MIT/LSE authors of Mastering Metrics, “No.” The reason it looks that way is selection bias. In a chapter on regression, they explain that you have to compare “equal people” at an elite school and a state college. Once you have equal ability and the same gender, the pay gap closes. Then, if you control for “OVB” –other variable bias like family size, it contracts even further. Consequently, they tell us that the elite school diploma is not the reason for a bigger pay check.

I guess that takes us to Frank Bruni.

In Frank Bruni’s recently published, Where You Go Is Not Who You’ll Be, he debunks the assumption that your college is your destiny. Looking at CEOs, psychology, incentive and a host of variables, he tells parents to stop pressuring their kids to get into an elite college. It’s not the college that counts; it’s the kid.

More than the connection among earnings, success and elite colleges, our focus took me to the extensive requisites of valid research. Whether looking at the value of an elite school education, the merits of tuition free junior college or the signaling value of a diploma, forming a cause and effect connection for human capital formation is daunting.

How the World's Most-Consumed Liquor Changed the Corn Market