Why We Want a Starbucks Pumpkin Spice Latte

Rumor has it that massive containers of Pumpkin Spice Latte Flavoured Sauce have already arrived at Starbucks stores around the country: 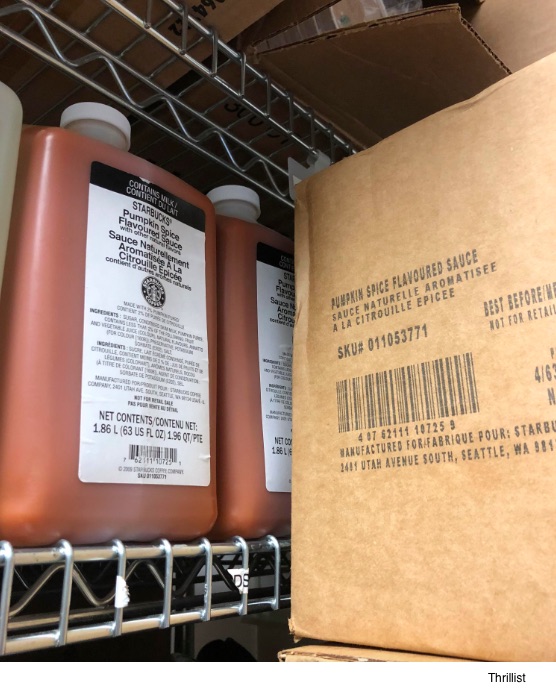 Last year, only select customers could buy the drink on September 1 while the rest of us had to wait for September 5. (How do you become a select Starbucks customer???)  This year’s launch date, leaked to BusinessInsider, is August 28.

Where are we going? To why we demand limited edition drinks.

History of the Pumpkin Spice Latte

When the PSL was first introduced in 2003, Starbucks reputedly was concerned about a “pumpkin” drink. But by 2012 it was so popular that a shortage became the “Halloween Horror Story.” At the time, one customer tweeted, “”My world almost ended this morning when the local Starbucks told me they were out of Pumpkin Spice Latte.”

Still though, the drink had artificial ingredients in an era that was increasingly all natural. So, in 2015, the new PSL recipe put in real pumpkin and took out the caramel color. However, a grande also had more than nine teaspoons of sugar and a whopping 380 calories.

The Pumpkin Spice Latte is Starbucks’s most popular limited edition drink. Each year it launches at the end of the summer and then vanishes after Thanksgiving: 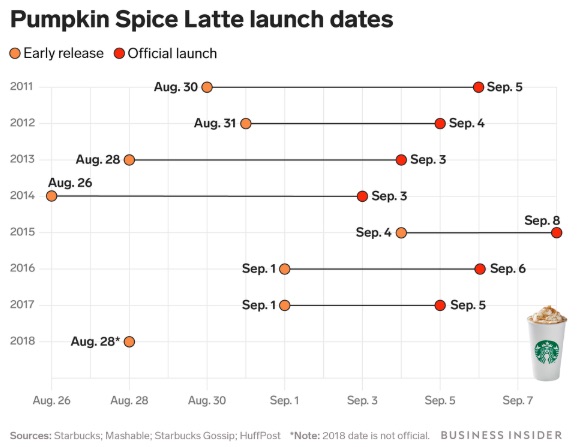 Perhaps an economist told Starbucks not to leave a popular limited edition latte on the menu. Her reason? How we perceive that extra gulp.

Given a pile of chocolate chip cookies when we are hungry, the first is delicious and so too is the second one. But then the extra pleasure we get from each subsequent cookie plummets. Or, using economic language, we say that the marginal utility diminishes.

Similarly, when Pumpkin Spice Lattes hit the menu, fans rush to purchase them. For whatever reason–taste, anticipation, trendiness–the quantity we demand surges. Next however, the excitement subsides and, sooner or later, we buy less. Like our chocolate chip cookies, we experience diminishing marginal utility. Every extra Pumpkin Spice Latte tastes less good…

Until next year when we again eagerly await the launch date.

My sources and more: Although I am in Starbucks frequently, I have never purchased PSL because I am one of the few people who dislike its flavors. So, having never tasted it, I’ve had a second hand (and biased) perspective that is based on Popsugar,  BusinessInsider, and Thrillist. I did smile though after reading about the NYC shortage in WSJ’s “Halloween Horror Story.”