The Path of the Shifting Center of Global Economic Power

Let’s start with a dot in the Atlantic Ocean, maybe 900 miles from Morocco, that we can follow as it glides eastward toward Izmir, Turkey.


Also looking at Asia “rising,” Hans Rosling, in one of his wonderful TED talks, speedily takes us from 1858 to 2048 in a statistical horse race.

Conveying a slightly different picture, the consulting firm McKinsey created a boomerang to show a changing economic center of gravity. 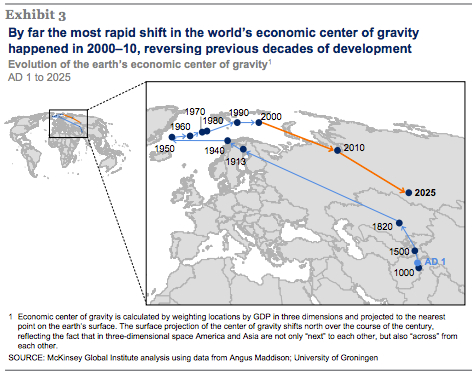 McKinsey also gathered data from the world’s 600 top cities and concluded that 440 in emerging markets will fuel the world economy by investing in new buildings, water infrastructure and ports. 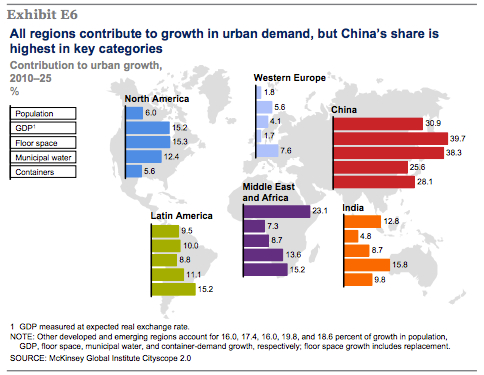 And, if we look even more closely at those 440 cities, we see an increasingly affluent urban consumer. 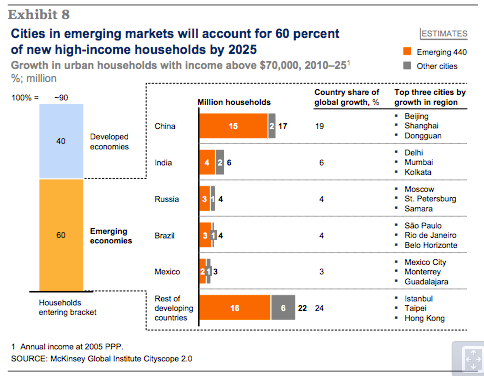 Our bottom line: Moving beyond our graphs, we need to imagine the people who are creating a shift in global income. Perhaps exacerbating inequality, a group of urban consumers in China and other emerging markets will become more affluent. These are very real people whose rising incomes are pulling the center of the global economy closer to their homes and jobs.

The Costs of Being Prepared for a Natural Disaster