The Huge Impact of a Rather Irritating Invention

Whenever I visit Manhattan’s Upper West Side, my cost for parking skyrockets. No, not because of pricey parking lots. My cost is the time I waste by repeatedly circling blocks and blocks until I find a space. According to one study that focused on 15 Upper West Side blocks, I probably traveled over one-third of a mile before finding a space (or entering a parking lot).

Explained by an urban planner, the problem is far bigger. We can start with New York’s three million on-street parking spaces. Extending over 17 square miles, the area is equal to one-twentieth of the city or 13 Central Parks: 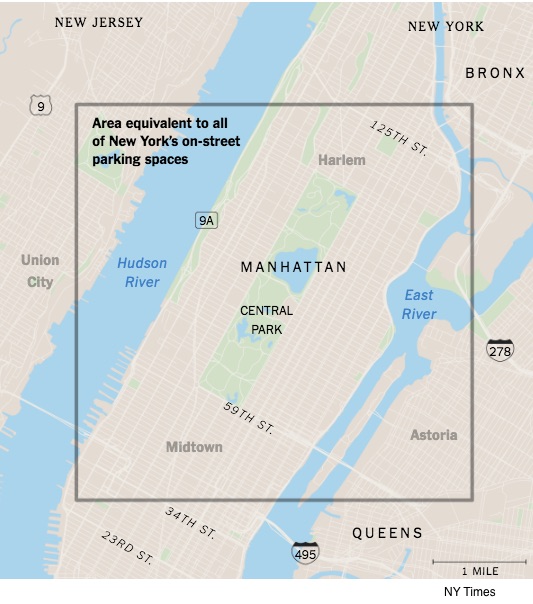 And yet, close to 97% of those on-street spaces are free. And close to 78% of the households in Manhattan don’t even own a car. So, doesn’t more of a parking fee make sense?

Urban planning professor Donald Shoup suggests parking permit districts in which drivers pay to park in certain areas. Alternatively, if the city just metered half of its “free” spaces, it would generate an estimated $3 billion.

All of this takes us to the connection between a seemingly small and irritating innovation and a very important economic idea. The innovation is the parking meter and the idea is the tragedy of the commons.

Oklahoma City is the home of the parking meter.

After a manslaughter acquittal in New Mexico, Carl C. Magee went to Oklahoma where he started a newspaper, chaired Oklahoma City’s Traffic Committee, and co-invented the parking meter with an engineer and a plumber (who figured out the water-proof shell). It was called the Park-O-Meter.

You can guess why cities wanted meters. Not only were they an ideal source of revenue but short-term parking helped retailers. After all, some cars were clogging downtown streets looking for places to park and others were hogging spaces, But still shoppers were exceedingly irritated that they would have to pay to park.

During July, 1935, Oklahoma City got the country’s first parking meters: 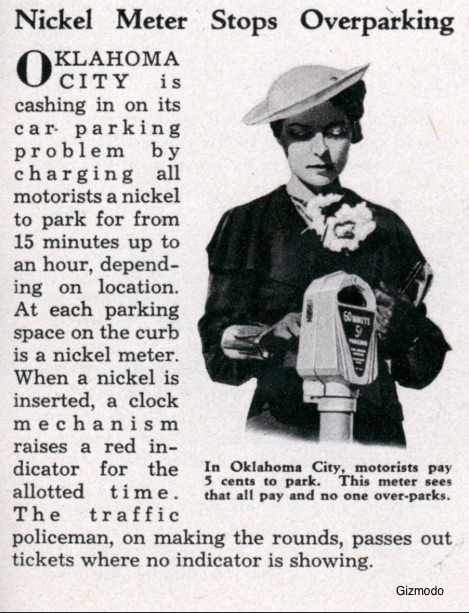 Called the tragedy of the commons, we overuse New York City’s unmetered spots because they appear to be free. But they are not. The cost that we all pay includes the sacrificed municipal revenue, the time spent looking for a space, the wasted fuel, the extra air pollution, and the additional congestion.

With parking meters and permits, the costs shift. Yes, drivers spend more money. But diminishing the tragedy of the commons, together, we all pay less. The reason?

A seemingly insignificant and irritating innovation from 1935.

A post script: In a past econlife, we said we would give a North Dakota parking meter update. As the only state to ban meters, their legislature was considering a repeal of the 1952 law that created the ban. It did not pass.

My sources and more: Thanks to City Lab for alerting me to Donald Shoup’s NY Times Op-Ed. From there, I found my promised update on North Dakota’s parking meter ban.  But, along the way, I was captivated by this history of the parking meter at City Lab and gizmodo.

Our Weekly Economic News Roundup: From iPhones to Baseball Food

What Soccer Can Teach Us About Investing