Gender Equity for Saudi Women at Starbucks and Beyond

Today is the first day that Saudi women can legally drive.

They won’t need permission from a male guardian to get a license and can use their own car to get somewhere. The demand for private drivers will diminish as will the time waiting for them. Like other businesswomen, one restaurant owner said she was happy that now she could pick up her own supplies.

However, the World Economic Forum ranks Saudi Arabia 138 out of 144 for gender equity. So today, let’s look at a specific (Starbucks) story and then the big picture. Meanwhile, please think about the gargantuan amount of land, labor, and capital that discrimination wastes.

During 2016, because Starbucks had no gender wall in one of its Saudi shops. only men could enter. Or, as a sign indicated, “Please no entry for ladies only. Send your driver to order. Thank you.”

This person said they refused to serve her:

Someone else continued the exchange: 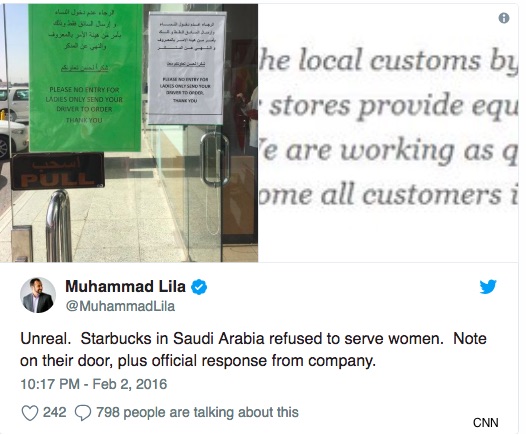 In a reply to CNN, Starbucks said it subsequently adhered to local customs by adding a wall. Their statement continued with, “We are pleased to share that the store is now accessible to single men on one side as well as women and families on the other side.  Starbucks has now 78 stores in Saudi Arabia and all stores cater to both families and singles, except for one that is exclusively reserved for women and families.”

Each year, the World Economic Forum (WEF) ranks gender equity by looking at four categories of indicators (and then a plethora of subcategories):

Below, you could be surprised by several of the highest ranked nations. But it all makes sense because the WEF approach is based on a male female comparison within each country. For example, with education, a country like Iceland has close to 100% secondary education enrollment for males and females. In the Philippines, the numbers are closer to 60%. And yet both rank high because we are recording a male female ratio.

Through the WEF page on Saudi Arabia, we can see why it is so close to the bottom for gender equity.

This “Score at a Glance” shows that they fare far better on gender parity with education and health than the economy and politics: 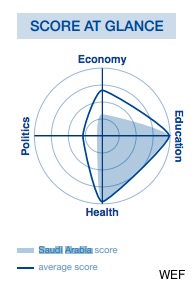 Perfect for the specifics,  this “Country Scorecard” shows why their distance from gender parity is especially considerable for economics and politics: 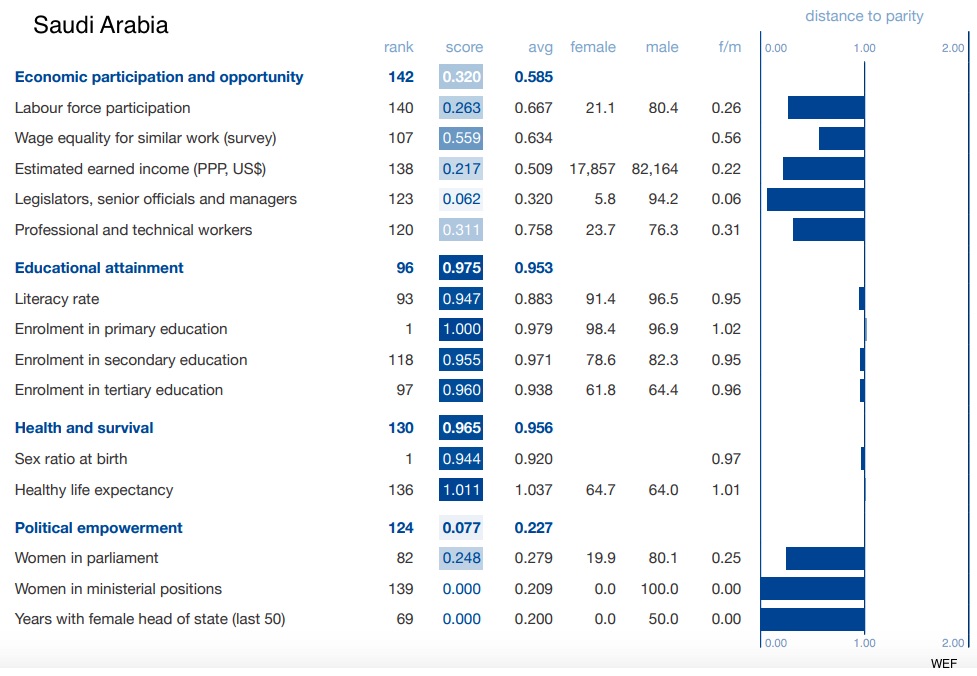 The line displays the maximum potential of the Saudi economy. The dot shows us that they could be doing so much more…

My sources and more: If you would like more detail, today do begin with CNN for the Starbucks story. Then, the NY Times is one of many possibilities for the impact of women being able to drive legally. And finally, for a bonanza of gender equity data on 144 countries, do spend some time with the WEF report.

Our Weekly Economic News Roundup: From Moon Dust to Marshmallows

Breaking the First-Digit Law and Other Number Crimes