Breaking the First-Digit Law and Other Number Crimes

Sometimes a missing number can matter more than we might realize.

Where are we going? To thinking at the margin. But first, two numbers…

The First-Digit Law (a.k.a. Benford’s Law)

As a physicist at Southern Methodist University during the 1920s, Frank Benford noticed that the front pages of his logarithmic tables were more worn than the back ones. Unlike most of us, he began to wonder if there were more lower numbers in the world.

Below, you can see Benford’s Law (a.k.a. the first-digit law). For the number 876, there would be just a 5.1% chance that 8 would have been your first digit. Do take a look at the likelihood of a 7 for a second digit and a 6 for the third: 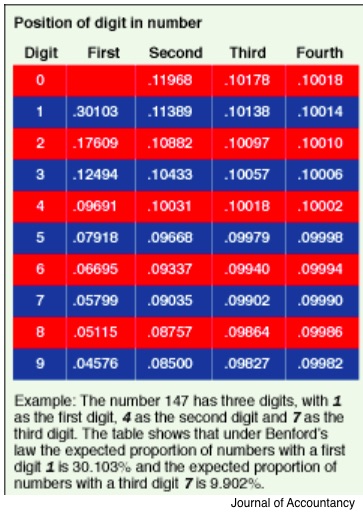 It reputedly was Benford’s Law that alerted statisticians to Greece’s fiscal problems. Just before Greece joined the euro in 2000, the EU officials who reviewed its national accounts quickly saw that something was fishy. All because of clues from Benford’s Law, they concluded that Greece’s low deficit numbers were false.

You can also get suspicious if the number 4 is missing. This time though we are talking about corporate earnings.

From 1988 to 2006, Dell Inc.’s earnings had no 4s in the tenth position (the first digit to the right of the decimal). The reason was rounding. According to the SEC, Dell had been changing its 4s to 5s periodically to meet or exceed what the Street expected. Dell denied the charge although it did pay a $100 million fine.

In a recent paper, two scholars demonstrate that this kind of “quadrophobia” can shape a firm’s EPS (earnings per share) management. When you round up from, let’s say, 13.4 cents to 14 cents, you are actually adding an entire penny to your EPS. Think of it this way: 13.4 cents should be rounded down to 13 cents. However, it instead goes up to 14 cents when rounded by Quadrophobic firms. So we have a penny difference between the rounding down that should have happened and the rounding up that did happen. WSJ tells us that the SEC is now investigating 10 potentially Quadrophobic firms.

As Alfred Marshall (1842-1924) explained, much of economics occurs at the margin where we are considering something extra. At that margin we decide whether to sleep the extra hour or produce the extra piece of pizza. Similarly, choosing numbers takes us to the margin.

Whether adding or eliminating a 1 or a 4, our decision is at the margin.

My sources and more: If you move onward to just one article, do look at the Benford story. “Quadrophia” is much less interesting but has contemporary significance. And finally, thanks to WSJ for alerting me to the academic study on rounding up that inspired today’s post.

Please note that I decided to use digits for all numbers today rather than adhering to a more standard style.

Gender Equity for Saudi Women at Starbucks and Beyond

How the EU and the U.S. Fought a Banana Trade War