Who Will Care About the Starbucks Price Hike?

Starbucks just announced that a cup of brewed coffee will cost 10 to 20 cents more. While the price increase depends on where you live, a “tall” (their smallest size except for the “short”) probably is somewhere between 1.95 and $2.15 before tax. 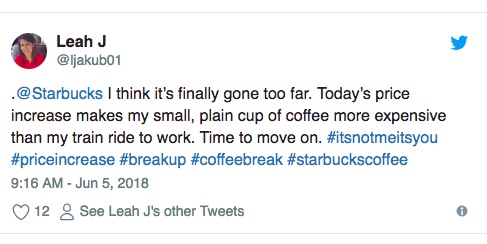 Who agrees with Leah?

It could relate to Dunkin’ Donuts and McDonald’s, a Frappuccino, and a rubber band.

Thinking of the recent price hike, we need to ask if we have substitute products. I suspect the answer depends on the coffee drinker. Some have said that there is a coffee war among Dunkin’ Donuts, McDonald’s and Starbucks. If you agree, then the first battle started in 2002 when Dunkin’ Donuts announced a new line of espressos, cappuccinos, and lattes. As for McDonald’s, it entered the fray with McCafé in 2009. Lower priced than Starbucks, it offered its version of the latte, the cappuccino and the mocha to which it recently added a caramel macchiato, a vanilla cappuccino, and an americano.

If the three brands are interchangeable, then the price increase will make Starbucks less attractive. On a Starbucks graph, an economist would shift the demand curve to the left to display less demand because people were switching to cheaper substitutes.

Higher Starbucks prices can also take us to reference points. Tall, grande, and vente cups of coffee have always been the cheapest drinks at Starbucks. Because I buy the coffee that is custom made in their Clover machine, my price is closer to $3.00. As a reference point, that clover makes the price of a basic cup of coffee, even after an increase, look inexpensive. Similarly, compared to a Frappuccino, a higher priced plain coffee is still pretty cheap.

Maybe though it all comes down to your elasticity. And that is where the rubber band enters the picture.

If price changes a lot and the quantity we buy remains almost the same, then our demand is inelastic. By contrast, if price swings have a big impact on buying, then our response is elastic. With elastic demand, like a rubber band, the quantity we demand stretches when price drops and contracts when its rises.

However, there is price point for all of us when our inelasticity becomes elastic. And that returns us to Leah’s Tweet.

My sources and more: After seeing the increase at WSJ, I went to Eater which is always good for food and drink insight. Meanwhile Refinery29 told a bit more and Money  looked at the coffee wars. Finally, I even discovered the coffee war academic perspective here.