The Wall Street Journal recently introduced us to an orthodontist who had not yet repaid $1 million of his student debt…and probably never will.

You can see below that becoming a dentist is expensive: 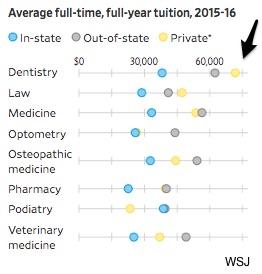 Not quite typical, this orthodontist was one of 101 people whose outstanding federal student loan exceeds $1 million. At the $100,000 level, there are approximately 2.5 million individuals. As for the average, it is a more down-to-earth $17,000.

Should we be concerned?

These are some of the facts…

Based on four-year state institutions, the Midwest and Northeast have the most student debt. If you live in New Hampshire, Maine, or Pennsylvania it is likely that you owe more than someone who comes from New Mexico, California or Wyoming. But you probably owe more because tuition is higher.

Below, the darkest states have the highest proportion of student loans: 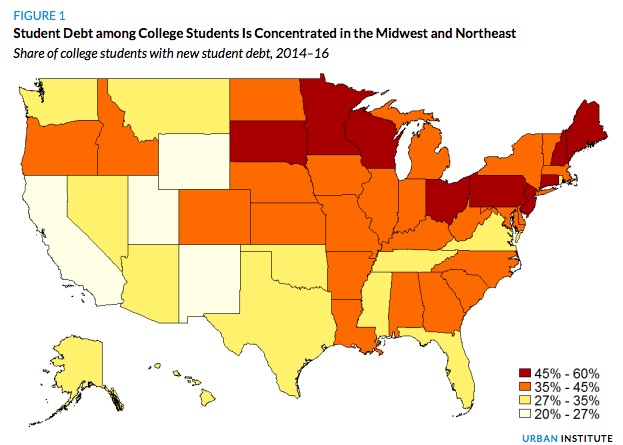 The AAUW (American Association of University Women) tells us that women hold two-thirds of all student debt. They point out that yes, there are more female students. But still, women’s average debt exceeds men’s. And the burden is compounded by the amount of interest women owe because they repay debt more slowly, .

You can see how the AAUW uses two graphs to connect the gender pay gap to the college loan problem:

Fifty-three percent of all adults with a bachelor’s degree or more education have outstanding student debt. Furthermore, comparing 2011-2012 to 1989-1990, we’ve moved from half to two-thirds of all college seniors using loans for their education.

Now at $1.3 trillion, the amount of student debt owed by U.S. households has tripled from 2001-2016. However, unlike other forms of household debt, delinquencies have been rising: 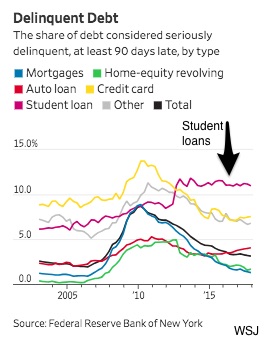 So, should we worry?

In their “Feds Notes,” the Federal Reserve does not sound very concerned. Attributing the surge in loans to higher college enrollment and rising tuition, they don’t believe the debt will constrain the consumption that is close to 70% of the GDP. Furthermore, because 90% of outstanding student loan debt is guaranteed by the federal government, financial institutions are not “highly exposed.”

They do express concern that household spending could be crowded out by debt service but then conclude a minimal drag on GDP growth. Similarly, they point out that at risk borrowers could jeopardize other credit markets but again conclude the risk is not considerable.

Instead, the Fed reminds us that the loans are adding to the human capital that fuels consumption. And that returns us to our orthodontist who owns a $400,000 house, drives a Tesla, and earns more than $255,000 a year.

My sources and more: Having just seen a WSJ  article about the largest loan careers, this Brookings commentary was especially relevant. From there, this CNN  student loan discussion provided a new perspective as did the AAUW report. But if you want more data, Pew, the Urban Institute, these “Fed’s Notes,” and a 2018 Federal Reserve Report have it.

Please note that the numbers I use from WSJ differ slightly from a 2018 Federal Reserve Report.

Six Facts We Need To Know About Medicare

Who Will Care About the Starbucks Price Hike?