With the iPhone X, Apple has again given us a Thorstein Veblen moment.

At 9:20, you can see the iPhone X but first do start with the Tim Cook intro at the beginning:

We remember Thorstein Veblen because he described conspicuous consumption in his book, The Theory of the Leisure Class (1899).

According to Veblen (1857-1929), affluent consumers try to convey their power and wealth through excessive leisure and shopping. Servants and employees help the affluent do less while their money signals their status when they buy more. Especially by purchasing useless items that are very expensive, the upper class broadcasts its superiority. 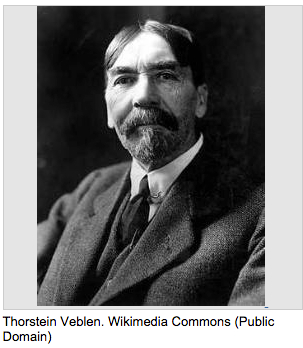 Like the affluent that Veblen targets, the consumers who will buy the $1000+ iPhone X are sending us a message. That message may be somewhat different from Veblen’s but the intent is the same. They are signaling their elite tech taste.

Apple says its new technology justifies a highest-ever base price. Others say they are purposely creating a super premium model that generates aspirational excitement. As one reviewer pointed out, “The iPhone 8 will do just fine for $300 less than the glitzy iPhone X, even though it won’t make your friends and colleagues jealous.” 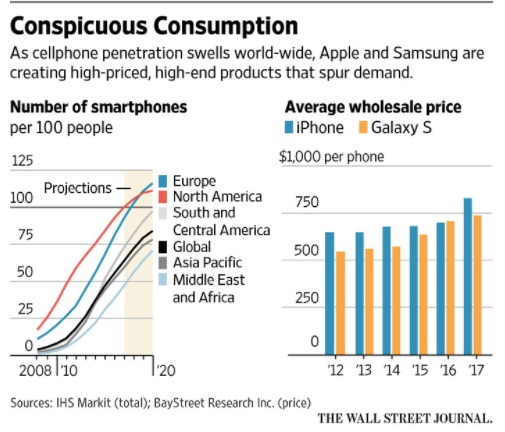 And according to one marketing group, people in relatively affluent states are somewhat more likely to own an iPhone: 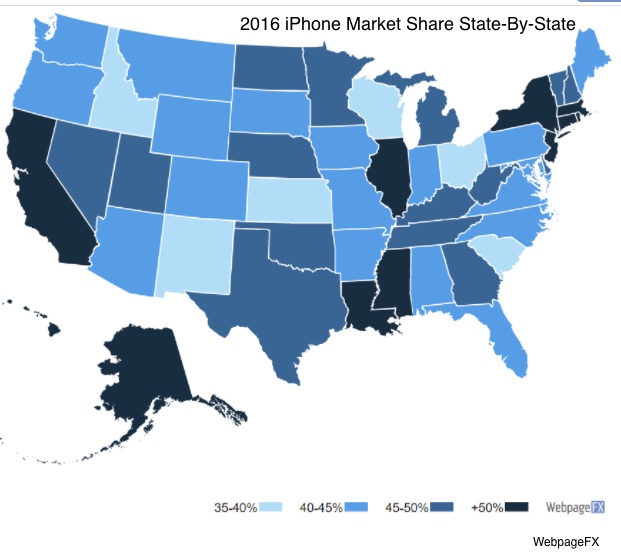 As an oligopoly, Apple has used its pricing power and product differentiation to target the more affluent consumer. Selecting higher prices and emotion stirring launches, Apple might be very aware of conspicuous consumption.

My sources and more: If you want to journey further through Apple’s market, I recommend WSJ’s smartphone pricing articles here and here. From there, other possibilities include MacDaily world and this (analytically questionable but captivating) state-by-state sales analysis. Finally, among a slew of reviews, this one from the Economic Times was typical.

The Veblen description and Our Bottom Line were previously published in an econlife post.