In 1994, Amazon started as an online bookseller. Buying companies like Zappos, at first it stuck to e-commerce. But then, in 2012, its acquisitions path veered into cloud territory and, by 2020, it was hosting more than half of the top 10,000 websites. Much more than e-commerce, Amazon depends on web services for its operating income:

Through the websites it hosts, Amazon’s size is so very apparent. However, for it and the other big tech companies, we can see their size in many different ways.

The Size of Big Tech

Amazon’s acquisitions fueled its growth. In 2017, its Whole Foods purchase took it to in-person grocery retail. Since then, Ring’s video doorbells, Blink’s home security, and Eero’s WiFi routers entered the Amazon family and also our homes. Meanwhile. Amazon is involved with health, robotics, and autonomous vehicles. The Washington Post estimates that 40 Amazon subsidiaries relate to its original business while  71 are in new sectors.

Similarly, for Apple, or Google, or other big tech, the same patterns appear. With acquisitions feeding growth, at first they stuck with their roots. But eventually, it made sense to enter new areas. For Apple it was the move from hardware to apps. In between it bought firms that led to and then nurtured iTunes and music, Siri and sound recognition, and its artificial intelligence capabilities. In 2014, with streaming in mind, Apple bought Beats Electronics and the Apple Watch took it to healthcare. By 2021, it was composed of approximately 27 businesses in its original fields and 96 in new sectors. For Google the acquisition numbers get even larger, with 81 (original) and 187 (new sectors).

At the same time, the march toward scale meant big tech would occupy an increasingly larger slice of the S&P 500: 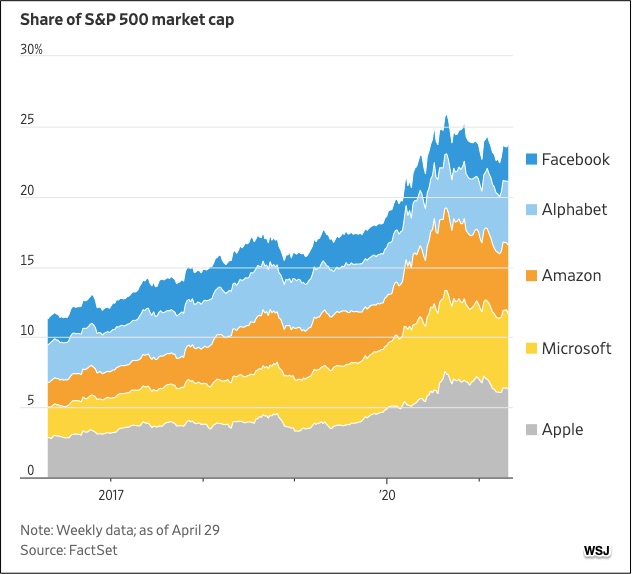 Big tech has used its acquisitions as a competitive device that propelled it rightward along a market structure continuum. Shaping business behavior, a market structure reflects power. Far to the left on the scale, we have perfect competition where a vast array of small firms are controlled by the supply and demand sides of the market. Moving rightward to monopolistic competition, businesses become bigger and increasingly powerful. Then though we reach the entities that have much more pricing and policy making power but are so large that market entry and exit are tough.

We would place big tech rather close to the far end of our scale near monopoly where one firm has considerable power:

Looking at the size and power of big tech takes us to the immense benefits and costs of scale. As always, it returns us to the importance of recognizing that like all decisions, scale requires tradeoffs.

My sources and more: This Washington Post article started me thinking the different ways to see big tech. From there, the possibilities multiplied. The House Judiciary Committee had a report, Hustle had what it calls Snippets, and WSJ had its spin.

How the Pandemic Changed Our Impulse Buying