The Nudge Toward a Goldilocks Savings Rate

Today in Econlife’s Sunday Charts: U.S. citizens like lotteries. The U.S. saving rate is plummeting. Combine the two and maybe we can use a lottery to get people to save?

The basic idea is to give savers lottery tickets. The number of tickets depends on the size of the deposit. If your ticket is drawn, you can win a big cash prize and if you lose, you still have your savings and some interest too. True, current banking regulation prohibits lotteries but several credit unions are experimenting with the concept.

And, it appears to work.

With the y-axis indicating the percentage of disposable income that households save (they spend the rest), you can see that the U.S. household projected saving rate for 2014 is low when compared to other countries.

Also, our saving rate is low when compared to the past.

Defined as the difference between what we spend and what we set aside for the future, the U.S. personal saving rate (below) has declined. 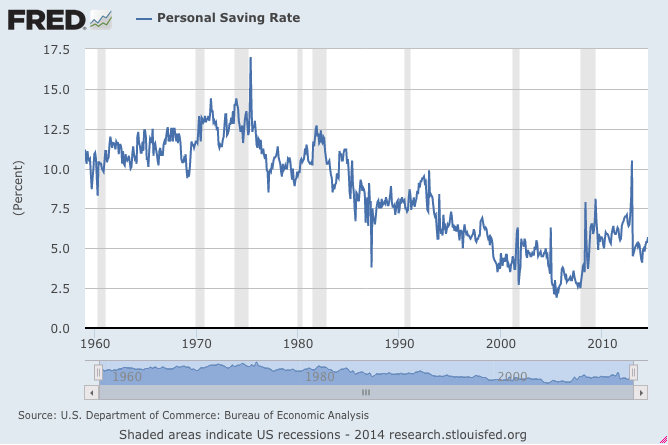 On a personal level and nationally, saving matters. Personally, we need our savings for retirement, for large purchases, and for emergencies, On a national level, businesses borrow savings to invest in the land, labor and capital that fuel economic growth.

The Bottom Line and Savings Incentives

A Goldilocks level of saving–not too much, not too little, but just right–would be productive for the U.S. economy and individual households. Perhaps by placing a deposit lottery in our arsenal of incentives, we can move to the Goldilocks level that one economist suggests is between 5% and 8%.