Recently, some of us have increased our tips. The reason helps to explain our tipping behavior.

No one is quite sure when tipping began. It could have been the Middle Ages when a Lord of the Manor wanted to say thank you for a job well done. Another possibility takes us to 16th century England. In coffeehouses, people were expected to tip in the urns that were labeled, “To Insure Promptitude” before any service was provided  (Yes–TIP, maybe the origin of the word.) As you might expect, soon hotel waiters, chambermaids, and hostlers (looking after horses) also expected tips. Visitors at private homes were even giving tips to their host’s footmen and valets.

In the U.S., thinking it was undemocratic, people at first resisted tipping. Still, affluent travelers exhibiting conspicuous consumption spread tipping. By 1895, a 10 percent tip was typical.

Economists who study tipping conclude its purpose is not to improve service. Instead, we tip because it is a social norm and maybe we feel guilty too: 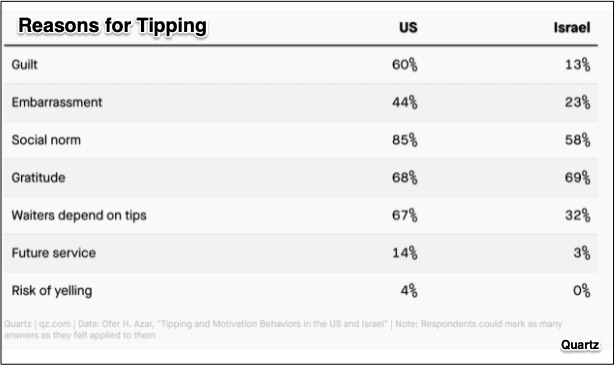 Perhaps though George from Seinfeld best demonstrates why we tip:

Explaining tipping, we can start with anchors and end with social norms.

An anchor creates information on which we can base a decision. With tipping, the anchor is between 15% and 20%. Also though, we enter social norm territory and the nudges that encourage us to behave a certain way. A “Nudge Squad” of economists in England even got tax scofflaws to pay what they owed by convincing them that following the law was a social norm.

Because tips too have become a social nom, restaurants have had a tough time eliminating them.

So where are we? The pandemic could be nudging some of us to leave larger tips. The entire list of why we tip has the reasons.

My sources and more: Thanks to Quartz for alerting me to Ofer Azar’s research,, here and here. You might also like to look back at at some past econlife posts, here and here, and at Vox for some up-to-date thoughts.

How to Create a Student Athlete Pay Market

Where a Pop in a Corn Price is a Problem