What a Tip Tells Us

Five years ago, restauranteur Danny Meyer began to replace tipping with higher prices in several of his upscale eating establishments. With more salaried workers, he could minimize pay disparities between the kitchen and the servers. Soon though, 30% to 40% of his “legacy” (5-8 years experience) front-of-the-house staff left.

Now, with restaurants gradually reopening in NYC, he announced that he would return to the traditional tipping system. Yes, he still believes that tipping contributes to unequal pay. But because he expects his diners’ generosity will surge, he wants his employees to benefit.

Let’s start with how much we tip. While the following tipping chart is approximately six years old (and omits businesses like Uber), I suspect it is accurate:

Most of us don’t tip to get better service. Still, we prefer tipping over a “Hospitality” charge. Instead, we tip to observe a norm and avoid guilt. Also, through a tip, we can say thank you.

Below you can see that we most likely tip because it is a social norm:

Restaurants reinforce our tipping behavior because most customers want to tip. Add to that the disincentive of the higher prices that would replace tipping, the displeasure of frontend tipped staff, and the cost of upsetting the status quo. Knowing also that tips could indeed improve service without costing the owner more, we wind up with reopened restaurants returning to tips.

Federally,  a “tipped employee” is someone who receives more than $30 a month in tips (unless otherwise indicated by a state). The federal Fair Labor Standards Act requires a $7.25 minimum when tips and the minimum wage are combined.

However, what you earn does depend on where you live. In states with a tipping wage, workers are paid less by their employers because tips are supposed to make up the difference. Other states mandate their minimum wage for tipped workers.

I could only locate this Department of Labor map from 2018. However, comparing it to 2020, DOL data, it appears accurate: 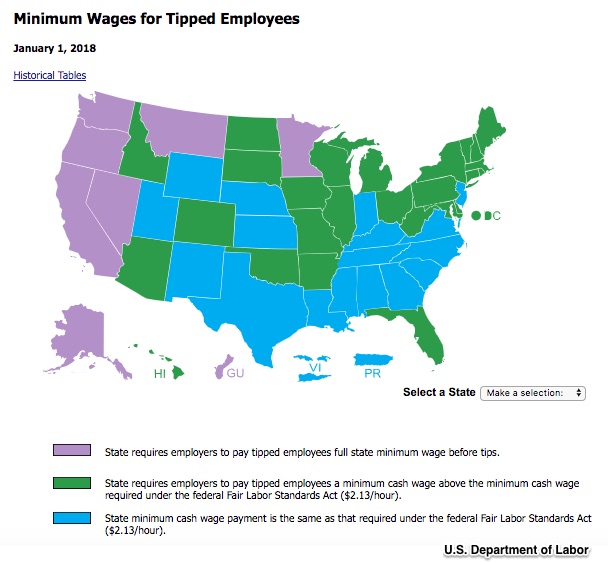 Tipping territory is definitely located in the heart of behavioral economics. As a social norm, whether and what we tip depends on what we think we are expected to do.

In this Friends episode, at 4 percent, Rachel’s dad was not observing the social norm:

So, what does a tip tell us? Providing insight about social norms, it extends far beyond restaurants and Uber. It even can take us to whether we wear a face mask.

My sources and more: The NY Times had the update on Danny Meyer. But for all you ever wanted to know about tipping (and still more), do read this 22-page paper in the Journal of Economic Perspectives. Then, for up-to-date data on tipping wages, the DOL had the facts.

Please note that some of our server section was in a previously published econlife post.