How to Create a Student Athlete Pay Market

The U.S. Supreme Court yesterday told us that the NCAA could proclaim a “no Lamborghini rule.”

They were referring to student athlete pay.

The NCAA (National Collegiate Athletic Association) is somewhat like a sheriff. Monitoring 24 men’s and women’s sports, the NCAA decides what 1,000 schools can and cannot do. They make sure that football teams have no more than 24 practices before the first game of the year. They prohibit schools from using limousines during recruiting visits. And they’ve limited athletes mostly to  tuition, room, and board.

Because of the Supreme Court, amateur athletes’ compensation rules will change. Affirming a lower court ruling in National Collegiate Athletic Association v. Alston, the Court said that the NCAA had violated the Sherman Antitrust Act and restrained trade when it proclaimed what a whole group had to do. Instead, in the future, individual schools, with some limits, can decide what to offer recruits. But, with the NCAA determining guidelines, the compensation has to relate to education. Justice Gorsuch said, for example, the NCAA could declare a “no Lamborghini rule.”

Here though it gets more complicated. At the same time, a slew of states have been passing their own laws that say student athletes can receive third party NIL (name, image, likeness) compensation. A Florida law will kick in on July 1. California has its Fair Pay to Play Act; Connecticut also has its own legislation. So, we wind up with different state laws for amateur athlete compensation, NCAA rules (when and if they decide), and then maybe the Congress will get in the act.

Sports Illustrated called it a “mess:” 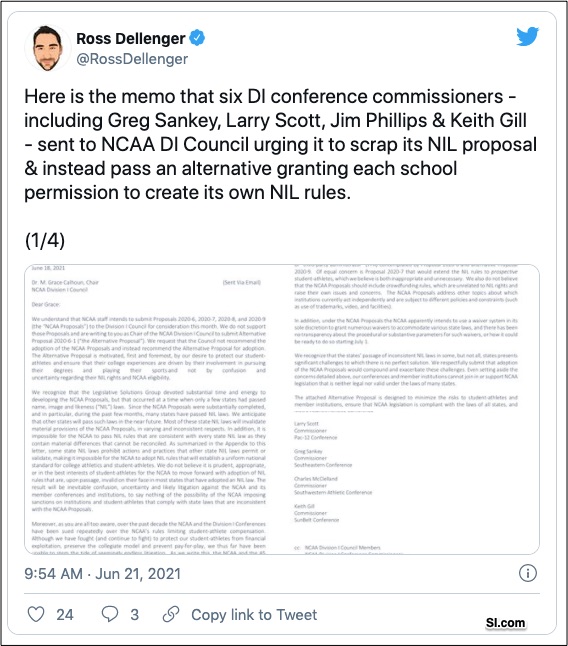 We could say that it all comes down to markets. Defined as the process through which price and quantity are determined through supply and demand, a market in college athletes had never existed. The NCAA said the market would result in bidding wars, more inequality among rich and poor schools, and less revenue for the subsidized sports that football and men’s basketball support.

My sources and more: WSJ, here here, and here, is a good starting point for understanding yesterday’s Supreme Court decision. Meanwhile, we can see the academic perspective from Penn Law and the athletic lens from SI.