By 2014, New York State’s minimum wage was ascending while Pennsylvania’s was not. At their shared border, where the communities were somewhat similar, they became different…but not as we might have expected.

By visiting the Pennsylvania New York border. we can see what happened when New York’s hourly minimum wage rose to as much as $11.75 while Pennsylvania’s remained at $7.25.

The 19 counties at the border: 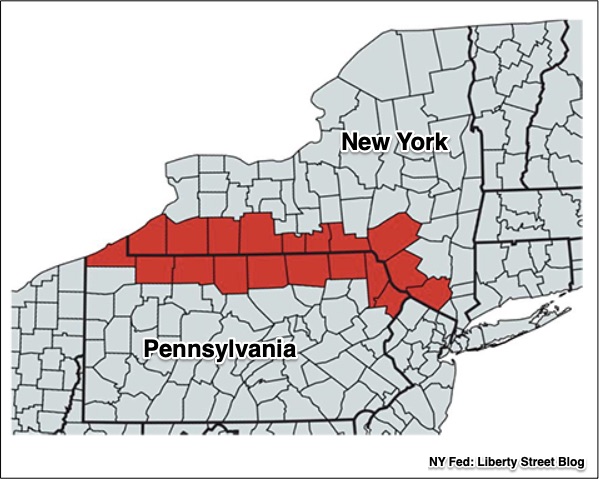 Comparing earnings and employment in the neighboring counties, I was astounded. The pay increases in New York were accompanied by job gains. In fact, they exceeded Pennsylvania’s.

At the same time that wages grew, leisure and hospitality low wage employment went up. Before the lines split, they both increased by 5%. And then New York’s took off: 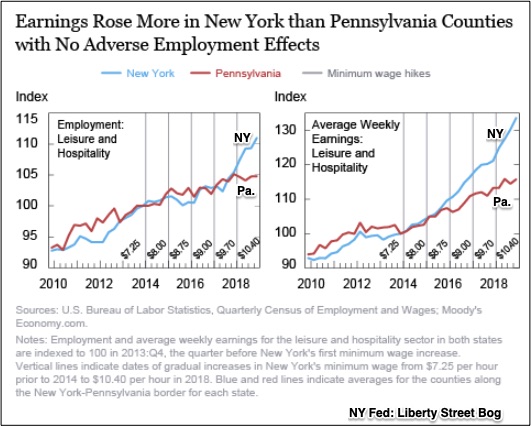 Even in a shrinking retail sector, the message is similar. After New York raises its minimum wage, still employment drops by a similar amount in both states. New York’s higher pay appears not to have been the cause of less employment.

The minimum wage data from the neighboring New York and Pennsylvania counties contradict the graph. However, as New York’s minimum rises to $15, I do wonder whether the contradiction will diminish. I would also ask if the wage hikes created a difference in worker quality as at this mall.

My sources and more: Having looked at the minimum wage here and here, I was delighted to see a new perspective from the NY Fed’s Liberty Street blog. Then stepping back to see the big picture, this CBO report, told more as did EPI.

Sections of today’s Bottom Line came from a previous econlife on the minimum wage.

September 2019 Friday's e-links: From the Japan World Cup to a Midwestern GM plant and Thought-Provoking econtalk