Why a Higher Minimum Wage is like a Google Map

We could say that the minimum wage is like a Google map. Only when you zoom in can you see what is really there.

When Seattle decided to elevate its minimum wage to $15, the city asked the academic community for study proposals. Only one group replied. They said it would cost them $1.7 million. The mayor had allocated $100,000.

Still, scholars at the University of Washington were delighted to have a treasure trove of minimum wage data (names and Social Security numbers) to assess. With additional funding from the city and foundations, they accepted the offer. While Seattle was a focus, the goal was a “multi-faceted, multi-disciplinary” analysis.

In 2014, Sea-Tac, Washington was the first place in the country with a $15 minimum wage. At approximately the same time politicians in nearby Seattle had a similar idea. After pulling together local labor and business leaders, they worked out a phase-in plan. Larger businesses had a 2017 deadline; smaller establishment had until this year to build up to the $15 minimum wage.

The conclusions that follow pre-date the $15 threshold. They are based on Seattle’s 2015 and 2016 minimum wage increases during the phase-in period:

Their first step was finding a control. For before and after comparisons, they needed similar municipalities where there was no $15 minimum. Considering a long list of variables and the need for a “Synthetic Control Method,” they selected areas near Olympia, Marysville, and Spokane. They also interviewed workers, followed families. The goal was to complement the numbers with the people.

While there is much more, a summary indicates that a minimum wage hike harms the least experienced workers while helping lower paid workers who are higher up on the jobs ladder.

Wages: The impact on wages varied. Hourly wages did go up approximately 3% for jobs paying less than $19 an hour. More experienced workers wound up taking home an average of $20 more a week. However, less experienced workers who already had a job had their hours cut so they took home same amount.

You can see that experienced workers benefited from the wage hike: 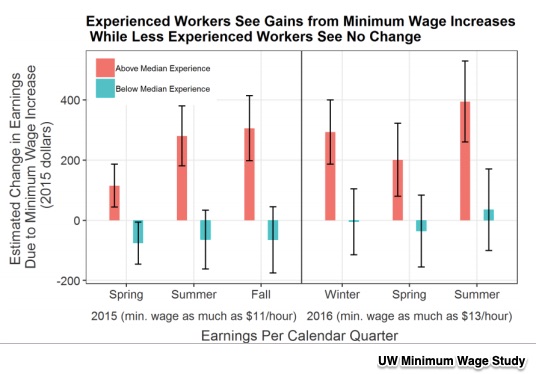 Jobs: Especially for new workers entering that labor market, employment opportunities contracted. Those with less experience looking for a job suffered the most. There were fewer jobs, less hiring. Furthermore, now you needed some experience. The wage hike meant that employers didn’t want to train low wage workers. In restaurants, they were hiring dishwashers who had washed dishes elsewhere. From day 1, someone needed to know how to use the equipment. 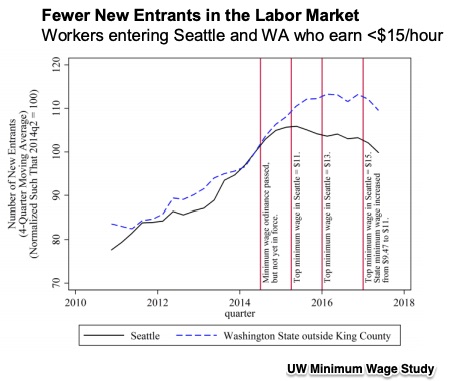 You can see who will feel the impact. People with no experience will have more difficulty getting a toe in the door. In the restaurant industry for example, there will be fewer busboys who work their way up because there are fewer busboys. Restaurants will buy their chopped food elsewhere instead of having their own employees do it. The incentive is to become less labor intensive.

Still though, the graph is only the beginning. Just like a Google map that zooms in to a street, the closer we look at the Seattle floor, the more we see.

My sources and more: This Econtalk podcast had the perfect update on the minimum wage. Its focus was this Seattle paper and the University of Washington’s “The Minimum Wage Study.”. Do look. There is so much more than Seattle.

Part of Our Bottom Line came from a previous econlife on the minimum wage and our featured image is from Pixabay.