But then they offered us Amazon Prime for $79.00, a prime number.

Our story starts in 2004 or maybe 2002. During the 2004 winter holiday season, on a Saturday close to Christmas, Jeff Bezos invited a group of executives to his boathouse. He said that he wanted to create a subscription two-day service that was pricey enough for people to pay attention to what they spent. But it also had to be affordable. They chose $79.00 and added that you could share it with four family members. The secret project’s code name was Futurama.

You know the basic idea. Pay nothing for an unlimited number of orders as long as you had the subscription. Bezos thought it would lock in his shoppers. Or as he explained, “I want to draw a moat around our best customers…”

First though they had to figure out how to make Prime’s description sufficiently alluring to get enough sign ups. This was the letter: 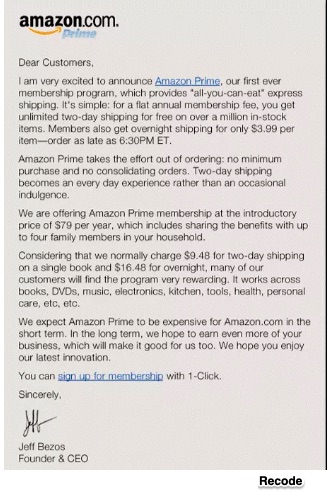 They also had to make Prime functional. And that takes us back to 2002. Since then, Amazon had been experimenting with speeding up shipping. When they began, it took 24 hours for an order to leave the fulfillment center. When they finished, it shrunk to three hours for certain items. The key was new software, “rejiggered” layouts, and lots of practice.

It was tough also because at the time they were expanding the number of products and, in 2006, encouraged more third party sellers to use their warehouses so Amazon could do the shipping. They needed extra items to make the Prime subscription more attractive. However, they had challenges like toilets that had to go out in two separate packages and easily broke.

The first people to sign up had already been paying for two-day shipping. That had the finance people worried about losing the shipping revenue from their best customers. Now though they’ve passed the 100 million mark. And last April, Amazon told us that Standard Prime will soon drop from two to one-day shipping.

A behavioral economist would tell us that Amazon transformed our online shipping reference points.

A reference point influences our opinion. With gasoline, for example, a previous week’s price of $4.00 a gallon makes us feel that $3.50 is a bargain. But if the price beforehand had been $3.00, then $3.50 looks astronomical. Similarly, at work we will be unhappy with a 5% raise when an associate gets 7%. If our stock portfolio plunges, we don’t feel so bad if the S&P declined even more.

So where are we? We can look back to Amazon’s Super Saver 10-day shipping and ahead to one day for an Amazon Prime yearly fee. Amazon has revolutionized what we expect.

My sources and more: Vox has a new podcast that had the Prime origin story as did their written description here. Do take a look. But if you want the behavioral side of reference points and framing and anchors, do go to economics Nobel Laureate Daniel Kahneman’s superb book, Thinking Fast and Slow.

Please note that several sentences in Our Bottom Line were in a previous post.