A Trade Story With a Happy Ending

The U.S. government asked Delta to pay a whopping 299.45% tariff on its $5 billion  airplane purchase from Canada’s Bombardier. Delta refused.

Large civilian airplane manufacturing has pretty much been a duopoly. Dominated by U.S.-based Boeing and Europe’s Airbus, the supply side is controlled by two firms. But then, Bombardier developed its C series, and Boeing’s 737-700s had competition. When Delta placed an order for 75 C Series planes, Boeing objected.

In a complaint to the U.S. Department of Commerce, Boeing said Bombardier’s Canadian and U.K. subsidies would harm its business because of abnormally low C Series prices. What Boeing did not say is that most airplane innovation is either explicitly or implicitly subsidized, Some governments give outright aid. Others, like the U.S. provide military contracts for aviation development. Then, Boeing winds up with military planes that can be converted to civilian use. They just replace the section for tanks with seats (and add some free pretzels).

Initially the Commerce Department agreed with Boeing and levied a massive tariff. Several months later, though, the U.S. International Trade Commission (USITC) reversed the Commerce Department’s decision. It said the U.S. could not issue “antidumping or countervailing duty orders.”  In other words, there would be no 300% tariff because Boeing’s sales were not unfairly harmed.

The Impact of a Subsidy

You can see what a subsidy does to the price of a plane. By lowering the manufacturer’s expenses, it boosts production. The result? A plane with a lower equilibrium price: 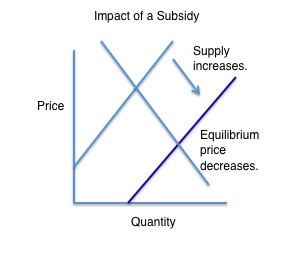 So yes, those subsidies did lower the plane’s price. But still, the tariff was unnecessary.

We could say that the happy ending of the Delta story is that erased tariff. But I see an even happier conclusion.

A multinational supply chain created Delta’s C Series airplanes. The engine? From the U.S. Part of the fuselage? From China. The wings? Northern Ireland. And that is surely only the beginning.

For us though it is a happy ending that a recent NBER paper says will lead to lower tariffs and more international cooperation. Nations, after all, will have less incentive to tax foreign goods when they become a part of domestic production.

My sources and more: With trade dominating the media, my go-to podcast is “Trade Talks” from the Peterson Institute. While I recommend all episodes, their discussion of Delta’s tariffs was excellent. From there, you might want to get an update from BusinessInsider and the academic perspective on supply chains and tariffs from this NBER paper.

Our featured image is a C Series airplane from Bombardier. Please note also that this post was slightly edited after publication.