The FDA has a labeling problem that is about much more than the words on a piece of paper.

On an egg carton, you cannot use the word “healthy.” Yes, an egg has a lot of protein, vitamins, and nutrients. But the FDA says the label cannot include the word “healthy” because an egg’s fat content exceeds their guidelines. Objecting, Pete and Gerry’s Organics has petitioned the Food and Drug Administration because they believe we need a new definition of “healthy.” The FDA agreed and initiated a review.

For now however, we are stuck with the absurd conclusion that pudding cups and toaster pastries are good for us while eggs, almonds, and avocados are not. This Pete and Gerry’s infographic displays the unintended consequence: 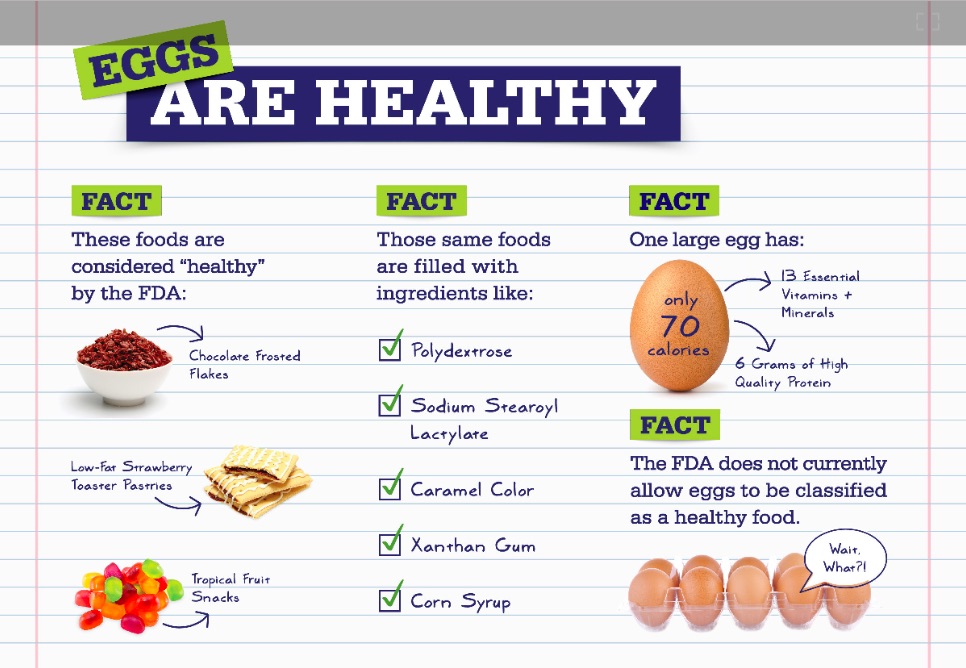 Meanwhile, a dairy farmer is in court because the FDA told him that the milk he sells with the cream skimmed off is not skim milk although it is real skim milk. But because the FDA says that to be called real skim milk it needs to have artificial ingredients (Vitamins A and D), his milk is “imitation skim milk.” The dispute will wind up as a First Amendment/free speech case.

These FDA guidelines remind me of Eugene Ionesco children’s book, Number 2. After a father tells his daughter that a telephone is called cheese, he adds that, “Cheese isn’t called cheese. It’s called music box. And the music box is called a rug. The rug is called a lamp. The ceiling is called floor. The floor is called ceiling. The wall is called a door.”

The book is wonderful. I do recommend it.

But we’d better return to our bottom line.

FDA label requirements define foods. They can tell us which foods are healthy and what skim milk is. The result? They can determine a firm’s market.

And, when they determine a firm’s market, they are also affecting its power:

For eggs and milk, I suspect that the FDA is moving producers to the left.

My sources and more: Thanks to WSJ for the eggs discussion. From there, I went to this FDA overview and a PR summary of Pete and Gerry’s petition. But for the best read, do go to the skim milk case.

The Mystery of the North Korean Economy

A Trade Story With a Happy Ending